We've all heard the phrase,"Doctor, heal thyself", a gentle admonishment to physicians to practice what they preach. It might be good advice, but I have an M.D. after my name, too, so why do I need some family practice doc to tell if I am doing alright?! In other words, I don't think there is any reason for scheduling my "annual" check-up any more frequently than my current five year intervals.

On a different topic, any good coach will tell you to work up to a major goal gradually and to make sure you are ready for any major athletic undertaking. I am currently JD's consultant coach for his marathon training and I wouldn't tell him anything different. In fact, I did tell him 16 weeks is not enough, he should start running now to ensure readiness. After January's 10K Get Fit Quickly scheme, it shouldn't come as a surprise that I decided to ignore this advice.

Though I have been pretty diligent about running since the year started, doing five days a week most weeks, my mileage has been quite low. I usually do one 6 mile run a week, that is, if the weather is nice, and everything else is about four miles. A lot of these four mile sessions include some sort of interval work, mostly just because I get bored running the same speed on the treadmill. I did one 7.5 mile run, but that was back in February. So naturally, a 20 mile race seemed like a good idea (actually only a mere 19.5 miles). And, oh yeah, it was going to be on trails, which is something that seems to be lacking in Salem, so I haven't done any trail running. I was feeling a little scared about my preparations, so Monday I ran the nine miles home from work. I managed nine minute mile pace pretty easily, so thought, "How bad could things go? I could walk the last ten miles if I had to."

Hoping NOT to walk much though, I had a goal sequence for myself: Tops on the list: nine minute mile pace or 2 hours, 55 minutes. Barring that, I wanted to break 3 hours. And then between those was the time of 2:58, which based on last year's times, would be good enough for a top ten finish. And then the very scared (and reasonable) part of me was thinking,"It'd be good to just finish."

I spent the latter half of this week with laryngitis and then the Sisters fire department decided to control burn all of the underbrush this weekend, making the air thick with smoke, but neither of those things really seemed to factor in until after the race was over, when I my lungs felt like it was a smog alert day in Southern California, so I'll skip to my Peterson Ridge Rumble race report:

There was no gun. Just a guy with a bull horn, saying "Ten seconds...three, two, one, GO!" And we all set off. The fast people headed to the front, the slow people crowded in the back, and I found myself in no-man's land, running somewhere in the middle. A little over a mile into the race, a bearded guy with grey hair and a bright orange shirt came up from behind along with his younger running partner. They caught up to a pack of ten or so guys about five yards ahead. I figured it'd be nice to be with a group, and so I caught up and leeched on to the back of the pack. I didn't think the pace changed much at all over the next two miles but slowly the pack dropped off until it was just me, the grey haired guy and his friend. We shared our city of origins at that point (they were from Corvallis), but not our names. As we turned off the dirt road on to the trail, the pair asked me if I wanted to pass. No, I told them, I was very happy behind them. Frankly, I was a bit nervous to be with them at all since they made such quick work of our pack. What pace were we running anyway?

I came out of the first aid station at 40 minutes. Many good runners write the splits they are aiming for on their race number or their arm. While I had calculated out 9-minute mile splits, I thought it'd be a bit pretentious to write them on myself and so I was a bit foggy as to what this split was supposed to be. In my mind it seemed like we were quite a bit ahead of pace.

I left the aid station right behind the Corvallis duo and let them pace up the hilly section to the top at aid station 2. The pair refueled faster than I, but I saw the orange shirted guy signaling me to join them as they were leaving, so I tossed back my water and grabbed a couple of animal crackers for the trail. "Thanks for letting me run with you." I said to them. "No, problem," my companion answered back, "besides we are going to need you to pace us on the way back, I can tell." As he said this my legs felt springy and light. Internally, I joked to myself,"No wonder my morning four miles seem so hard - it takes me eight miles to warm up!" I took the lead for our trio, as we started our 3.4 mile loop around the top of the hill on our way back to the previous aid station (now re-named aid station 3). When the trail went to single track, I was feeling good. I passed three guys; I chatted it up a bit with my new bud, Theo (his friend was falling behind at this point). And then even Theo wasn't hanging with me anymore. I passed two more guys before finishing the loop.

At this point, I gulped down a salt tablet and was immensely amused by this. While most Americans are getting something like five times the recommended dose of sodium from their diets, here I was ingesting salt in pill form. And this wasn't a small pill like I had imagined (sodium and potassium are measured in milligrams after all), this was an electrolyte horse pill. In my mind I jested: "Hey, Tiger, I might not have Gatorade specially formulated for me, but I need extra electrolytes, too!"

With the salt in my belly, I headed out and immediately passed a guy. Then on the downhill, I caught up with a guy and a gal running together. The guy asked if I wanted to pass, but I was ready to have someone else in the lead, so I hung back. A minute or two later he veered off the trail, presumably to the call of nature. The gal immediately picked it up, I figured she didn't like me on her tail. I thought she needn't worry - I was starting to feel tired and her stride looked a lot springier than mine felt at that point. Plus I figured if she paced me to the finish in strong time (for I knew we were ahead of my 2:55 goal), I would gladly let her finish ahead of me. We caught up to another woman about a quarter mile before the next aid station. I recognized her grey singlet with florescent pink piping as someone who had started in the fast pack at the beginning. We ran in line to the aid station - 2:12 - a good deal ahead of schedule, but man, my quads were getting tight fast.

I wolfed down a few candies and gulped a water. The two ladies were still munching when I took off. Less than a mile later we were back on the dirt road; I had passed one more guy. The road was hot and boring. Several wilting people were ahead of me. I passed four more guys as they took walk breaks, but I was slowing down fast. We crossed a road and I knew I was 20 minutes away, at least that is how long it took me to get there from the starting line. I ran six minutes, my thighs burned. Two more I told myself, then you can walk a bit. But with 12 minutes of running left, I thought I should get to the ten minute mark before I walked. At that point, I thought I should just slow down my pace for a few minutes before I needed to walk. It was all mind games, but it was working. A tiny downhill got my legs going a bit faster - keep it going for one more minute. Then let's try a couple more slow jog minutes. One of the wakers had started running again and he passed me back - the only person to pass me the entire race - Run with him for a minute. Ok, two more slow jog minutes. And, then I saw a fence and a building - CIVILIZATION! - you can go a few more minutes, you are almost there. Now you are crossing to the school, can't stop now, people are watching. At that point, there was nothing to do but keep running to the finish.

It took me twenty-seven minutes to get to the finish from the road, but that is because I hadn't considered that the finish was about a half mile past the starting line (with an evil lap around the track at the end). I didn't walk and so probably only lost a couple of minutes. I crossed the line in 2:47:22, ahead of all of my goals (8:35 pace!) and good enough for sixth place. The guy who passed me finished just ahead of me (Joe M.). Springy-legs Girl was seventh in the women's race. Theo finished in 2:50 and change. 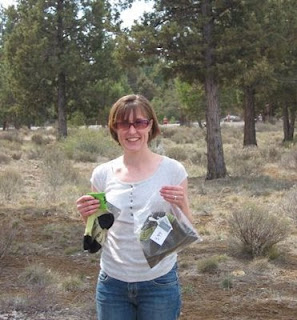 After the race with my lime green finisher's socks (no, seriously - they are quite nice and much more practical than a useless finisher's medal) and the Montrail hat I won in the raffle.

Who needs good advice and good training? And don't expect me to make a doctor's appointment anytime soon either!
Posted by Pam at 9:37 PM No comments: