...Or How To Improve Your Time Without Actually Running Faster

Republican Vice Presidential candidate Paul Ryan was lambasted by runners across the country when he presented himself as a sub-three hour marathoner, when in fact, the actual time from his one and only marathon was 4:01.  Ryan maintained this was an honest mistake, but most runners felt that times from major running events stay etched in your memory and that this error could only be a purposeful fabrication.

A 50 mile race would seemingly qualify as a  major running event. And yet it appears that my memory has failed me on this one. I reported my time as a “hair under 6:32” and even texted a friend 20 minutes after finishing that I ran a "6:31:5x." But when yesterday’s official results were posted, I was credited with a 6:30:44. All I have to corroborate my side of the story is a Garmin that died after five and a half laps and my memory, while they had electronic clocks, chip timing and dry brains. It really could go either way, but in an act of generosity on my part, I’ll concede the point and accept that I officially ran a minute faster than I remembered.

Sadly, I fear this incident will prevent me from running for Vice-president. Having this blemish in running recollection would just be fodder for too much bad press. However, I am happy to say that I did not use any asthma meds before, during, or after the race, so I should at least be able to avoid a scandalous Lance Armstrong-esque future title stripping. :)

...Or How Turn a 99 Cent Value Village Pillow Case into a 75 Dollar Gift Basket.

So what idea do you get when you see a pillow case, table fabric from my sister-in-law's wedding, calf sleeves, the bow from a birthday gift, spray paint and a bag of beads?? 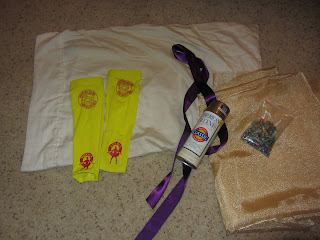 Ok, that is a silly question. Because the answer is so obvious: run 50 miles dressed as Cleopatra!!

For the last three years, I have been on the starting line for the Autumn Leaves Ultramarathon, telling myself it is an excellent "training race" for other races later in the season, but really I'll take any excuse to run in a costume!

Costumes bring a whole 'nuther layer of excitement to an event. Like last week when Mr. Mike told a room full of six year old boys that they could wear costumes to karate class on Tuesday. My son Liam was literally jumping for joy. Because already the kid knows there is something inherently awesome about doing side blade kicks while dressed as Darth Vader. And what could be more exciting than doing loops around the Willamette River Valley channeling the spirit of the last Pharaoh of Egypt!? Sure she slept with her brother and was a little slutty with Julius Caesar and Mark Anthony, but isn't that part of her allure?

So I gathered up all the necessary objects from around the house and came up with this: Ok, I actually got the pillow case from Value Village (for the stated 99cents) because I couldn't bring myself to cut up one of my own, but I am sure it was fine Egyptian cotton to keep with the theme. :) Everything else was from around the house. (Well, not the eyeliner either. That was a massive $7.99 investment at K-mart, but now I can finally check "Use liquid eye liner" off of my bucket list!). 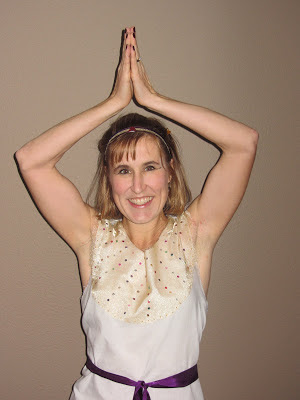 I was pretty pleased with the result.
When my mom saw it, she asked, "Did Cleopatra wear sequins??"
"No, Mom, but she had lots of jewels."
"Well, why don't you wear a bunch of necklaces?"
"Mom! I have to run 50 miles in this thing!"
"Oh."
So no, it is not an exact replica of Caesar-era Egyptian garb, but it's not bad for 99 cents!

Goals for the race were:
1) Defend my costume title
2) Get in a good training run for a mid-December long race (I guess that is confessing my true insanity)
3) Win the Lululemon gift certificate. Because making sure your ass looks good is one of the more important things in life.

On a 6.25 mile loop course, I wouldn't have thought one of my goals would be "Don't get lapped." But as the race unfolded, this became a serious concern. Olive Oil Joe was just cranking in the 50k, such that lap 4 was my fastest lap all day because I had to get it done before he finished his lap five. But even more concerning was Zach Gingerich, who was unreal in the 50 miler, practically keeping pace with Joe in the 50k and breaking 6 hours for the 50 mile!


Overall, I had a great day and accomplished all goals, including not getting lapped (barely!). It poured buckets for all but about 90 minutes, but I ran pretty steady all day and snuck in a hair under 6:32 for almost a 15 minute CR. I passed last year's winner around mile 49 for second place overall, but like I said, Zach practically lapped me! And while that Cleopatra get-up might work in the arid Nile delta, it was a clinging cotton rag by the end of 50 rain-drenched miles! But a basket full of candy and beer made it all worthwhile. Oh, who am I kidding? I would've done it for nothing!

Well, you write one little “down in the dumps” blog post and then even your closest friends start betting against you!

I got an e-mail from my friend Dennis two days before the Condor 25k: “BTW there is betting going on about the Condor race and your name is featured prominently.” The Corvallis running group loves to speculate and bet on ultras, and I have heard they even used to draft Fantasy Western States teams. So it didn’t surprise me that they’d try to get a little extra fun out of a hometown race with two “locals”- Alinna and me- as the favorites. But it looked like my previous blog post swayed a few betters– those who read bet against me! What I forgot to mention is that my competitive drive doesn’t tire nearly as easily as my body and I love Scott shoes (particularly the T2C’s!), the prize for the race. :)

I really wasn’t trying to sandbag in that post. I only logged 45 miles in the three weeks before Condor (yeah, that’s total!) and I really had no idea where I stood going in. I did not feel great on the warm-up so I decided to run a strategic race rather than an all-out race from the gun, and the decision paid off. Alinna is a very strong hill climber, and I just dogged her the first 9 miles, which were mostly uphill. After the Saddle at mile 9.5, the course was mostly downhill, and mostly non-technical. I eat that up so at that point it was time to boogie to the finish and claim my new dancing shoes! However, I wasn’t able to catch my Salem training partners, Dan and Shawn, who bested me by 15 seconds or so. Dan obviously didn’t want to get chicked as he tried to push me off the trail when I wanted to pass! (Well, at least that’s how I’m interpreting his errant elbow jab) Nice job guys, but watch out for next time! My friend Gloria picked up the master’s win, so Salem was well represented!
However, the real focus of the day was not racing or even free shoes, but instead honoring the memory of a dear friend, Dave “Condor” Bateham. Dave’s death hit me pretty hard, both because he was a healthy ultra-running cohort and because he was a father-figure type who succumbed to infection when my own father has also been plagued by post-surgical infections. But also because I feel like I owe a lot of my success in ultra-running to him. He was a fixture at the Saturday runs and he was always incredibly welcoming. The first time I ran with him, he was training for the McDonald Forest 50k with his son Eric and I remember thinking how awesome that was. Dave gave me advice when I first started running ultras and was a big fan when I started doing well. But really that had nothing to do with my running performance; Dave was the kind of guy that would make you feel awesome about yourself no matter how you did. Out on the course on Saturday when I closed the gap between me and Alinna the first time, I thought to myself, “Dave would be cheering for me to win.” But really Dave would be cheering for everyone equally, and he’d give not only his support, but his time to help others reach their goals.

The Condor 25k was a fitting memorial for Dave with local runners coming together to share the trails and do what he loved. Big thanks to Tia and Clem for putting together a great race in Dave’s honor. And thanks Dennis, Lobo, and Maistro for believing in me! Be sure to make Tia and Osito buy you the good stuff (and save some for me!) ;)
Posted by Pam at 8:38 PM 5 comments:

It’s been a rough week for running in the Smith household. I think we logged the lowest cumulative mileage in a couple of years. Mac’s toe is healing, but it's still bothering him too much to run (because he is a wimp) and I ended up with a monster cold and I only got out on Saturday for run on Mary’s Peak (because I am a wimp, too). I did manage to keep up with Dennis for a 2:33 loop, but I felt terrible on the way down and took a nice crash in some rocks and bruised up my wrist and hip. Combined total for the last 7 days – 14 pathetic miles! We are both supposed to be running the Condor 25k on Saturday. Mac is pretty sure he isn’t running. I am either in for a rough day or I will be the most tapered that I have ever been for a 15 mile run!
Mac reports laundry demands are WAY down. This is good for him, but a pity that we have not
gotten to test out our deluxe new laundry sorting system. Mac says he needs to sort the laundry in the laundry room; I say: no piles of dirty clothes on the floor. But we are looking to find marital bliss in a new ten dollar dorm room grade laundry hamper. Yep, living the life of luxury!
So tonight we sought solace in frozen yogurt. We’ve done a pretty good job avoiding the Limeberry store and their dairy cocaine this summer, but we lost our resolve tonight. If we are going to be out of shape, we might as well get fat, too. It is the American way.
Posted by Pam at 9:05 PM 2 comments: