Thursday I was taking a running survey and one of the questions was "In the distances you race, what are your most recent times?" The question was followed by a long list of race distances. Can you imagine my surprise when the one hundred mile race was right at the top?! Obviously, the surveyors wanted to honor the monumental feat of this race by placing it in the preeminent lead-off position on the list. How nice to finally give some well deserved recognition to the ultra crowd!

I quickly checked the top box and typed in "19:07" with pride swelling in my chest. But the feeling only lasted a nanosecond as the computer quickly rejected my accomplishment: "Invalid time".

INVALID TIME? Invalid time?!? Do you know how hard I worked for that time? But before I could give the hard drive a good smack, I re-scanned the race possibilities:

The list kept going, with a nearly exhaustive list of race possibilities, covering everything from 100 meters(!) to the marathon. There were no ultra-distances to be found. I had to chuckle, particularly given the computer's response to my entry. Was my time "invalid" or was it the time of an invalid at the 100 meter distance??

Ah, yes. I've got ultra-running on the brain and obviously saw what I wanted to see, but in reality ultra-running wasn't even on the survey's radar!
Posted by Pam at 8:46 AM 3 comments:

Today is the Nike Women's Marathon, but don't try to find out what is happening, because their website is the WORST marathon website I have even seen. In fact, there doesn't even seem to be a page that is actually dedicated to the marathon itself. I can't find live following and their Twitter hasn't been updated since before the marathon started. And last year after the Who-Actually-Won? snafu it was near impossible to find the race results on their site (but maybe that was on purpose!).

Isn't Nike supposed to specialize in running technology??
Posted by Pam at 10:13 AM No comments:

The Aftermath Of One Hundred Miles

Two weeks of sloth and recovery just flew by. And now another has passed, too, making three weeks since I finished Hundred in the Hood

After the race I couldn't sleep at all. I was exhausted but wired at the same time. I painfully tossed and turned all night. As morning broke, I was finally getting sleepy...just as everyone else was getting up to start the day! I ended up sleeping most of the afternoon which threw my circadian rhythm and sleep cycles WAY off for the next few days. It didn't help that my body seemed to be begging for lots of extra unconscious hours either. And with my two favorite germ vectors back in school, I found myself battling a bad cold.

Fortunately, the dreadful muscle burning was noticeably better every day. During the latter stages of the race, my right knee bothered me on the uphills, and my shins, especially my left, throbbed on the downs. Not sure what the shin issue was, but I had two lovely goose eggs the next day! 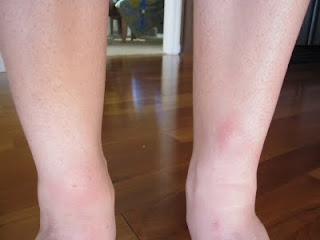 Two purple bumps and bruises on my shins, but they resolved quickly.
Mostly, though, I have recovered pretty well and I am getting back into running some again (I did 35 miles this week with four days of running). Oddly, my left knee has been kind of sore, but that is a minor issue. My big problem is my right foot: it is a mass of riotous and inflamed tendons. It started with a very sore peroneus brevis tendon, but the irritation seems to be contagious and now just about everything in my foot is sore. After a "long" run yesterday (just over 12 miles), it has been killing me. I will have to research rehab possibilities, plus I plan to order some new shoes, but I am fairly discouraged. I don't have anything planned for the rest of 2009, but I would certainly like to maintain good fitness going into 2010.