Autumn Leaves is a low key event in nearby Champoeg State Park. New Race Director Bret Henry and his wife Gail did the local ultra community a great service by resurrecting this race after a one year hiatus in 2009 and some problems in 2008. The course is a very flat, 6.25 mile loop mostly on paved bike path, but with about 1.5 miles of gentle trail each loop. The 50 mile runners, 50k runners, early starters, and (at 10am) 10k runners in combination with an out and back section made for a run where there were always people around, but not so much as to feel crowded. The course is billed as perfect "for your first ultra event or for the experienced ultra-runner to get that PR you always wanted." I fit a little into both categories as this was my first ultra after taking most of September off, but because it was the "easiest" course I have ever run, I also wanted a PR. 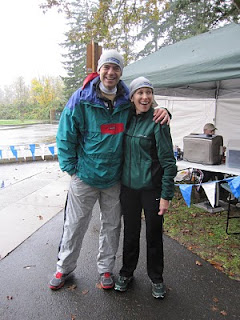 The RD's: "The beautiful Mrs. Henry and that guy" (those are Bret's words, not mine!)
I think in a race with two or more ultra distances, the "main event" is always the longest one. Ultra runners operate on a "more is better" mentality, so I think the competition/participation tends to center around the long event, but for me, the 50k was the right option. I joked all week that I was only running the JV event. That was not to belittle the 50k, but I just wanted to keep the race a light-hearted affair and not make too much out of it in my head. Also to keep things light hearted I decided to play along with the "costumes encouraged" aspect of this pre-Halloween race. So I broke out the costume box (doesn't everybody have one of these?) and found an old dress from a 60's party. My pre-race activities included finding all the right accessories to complete the look. I even spray painted my shoes white! Unfortunately, the shoe tech materials don't take paint well so the shoes turned out more "Nurse Ratched" than pseudo-white vinyl awesomeness, but A for effort, right? ;) 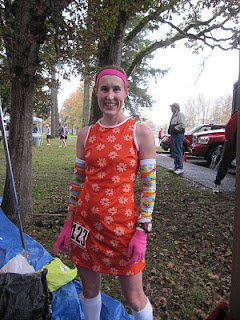 Go Go Girl! Get it? Cause I go, go! I know, genius, right? ;)
The first lap needed a headlamp for navigation and served as a warm-up. I was in 5th or 6th place behind a handful of guys, at least two of which were 50 milers. My second lap was significantly faster and I worried that I would pay for it later, but I managed to stay pretty consistent for the rest of the day. I moved up steadily throughout the day and finally caught the second place guy on lap four. The last lap was fun because all the 10kers started about 5 minutes before I completed my 4th lap, so there was a lot of new energy on the course for my final loop. Plus, the 10k back of the packers were really displaying their Halloween spirit and I traded a few laughs with several other decked out ladies when I passed by. Now why weren't there any guys or more ultra runners in costume?? 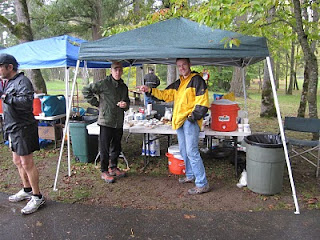 Who hired these clowns?? Just kidding, Geof and Larry!
The first place guy in the 50k was a 2:20 marathoner from Eugene (a town that seems to be over-flowing with 2:20 marathoners!) who was running his first 50k and didn't have any problems going 5 miles beyond his usual distance. He was definitely out of my league and kept me from enjoying an overall victory by pummeling me with a 3:21 finish. But I surprised myself with my pace and even ran my second fastest marathon ever (3:13) en route to a 3:51 finish time. My time was 8 minutes ahead of third and it broke the women's course record by 31 minutes. Mostly though, I am just psyched to feel like I am running well and enjoying it again!

For you gear and equipment types out there, here is a list of the high tech stuff that I wore to achieve my 50k PR:
- The Original Inc, 100% polyester dress in fluorescent orange. Surprisingly comfortable, though I'd recommend this for cold weather only as polyester doesn't "breathe" very well. However, when I run in tech fabric I usually smell like a homeless person by the end of the race (TMI??), but the polyester was stink free! I was pretty shocked by the washing directions: "dry clean only." Seriously, who dry cleans polyester?? Fortunately, it has withstood multiple machine washings with no ill-effects.
- A new pair of sock sleeves (aka Benmoes), K-mart, $2.00, some assembly required. I needed to combat the cold but not detract from the over look. I think the words "war is pointless" and the peace symbols on the converted socks added a special touch, tough it may be a bit of a faux pas to mix the iconic 60's styles of the go go girl and the hippie. But I figured I had a little bit more leeway since I was born in the 70's.
- Joe Boxer hot pink gloves (K-mart, $1.00). Classic ladies magic stretch gloves in a bright new shade!
-Hot pink hair band (K-mart, 3/$2.00), to match the hot pink gloves!
-Injinji knee high compression socks (Free Western States schwag)
- Spray painted (white) Brooks Adrenaline Shoes. As mentioned, this didn't exactly achieve the effect that I was hoping for, but even more disappointing was that nobody seemed to appreciate that I had sprayed my shoes. C'mon people, where is the love?? 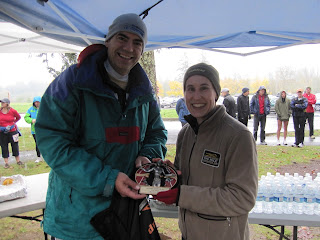 As a pathologist, the cornerstone of my job is the diagnosis and evaluation of cancer. But the reality is that over 90% of the specimens I see are benign. A good portion of my work day is spent evaluating acute (inflammation, ulceration, necrosis) and chronic (scarring, healing, hypertrophy) reactive processes in tissue. But it was only in the last couple of months that I have come to appreciate the differences between acute and chronic fatigue.
Western States was a bit of a Pyrrhic Victory for me: I won the battle (or at least got F10 in the battle!), but my body was ravaged by the effort. The nine weeks between Western States and Angeles Crest weren't fun. Running was a chore and mechanically, things just didn't seem to be working right. Somewhere around mile 37 of Angeles Crest, the full weight of my ongoing exhaustion hit me and by mile 50, I was ready to surrender. It wasn't a good outcome, but it forced me to accept how tired and beat up I really was.
All I can say is that I was in a pit of deep, chronic fatigue. I don't mean that in "Chronic Fatigue Syndrome" kind of way, but rather an on-going cycle of physical exhaustion.
A couple people said, "You probably have endocrine fatigue." It is a term I have seen on irunfar.com before, too. I don't know what endocrine fatigue means; it is certainly not something that was covered in medical school. Frankly, I don't buy into it at all. For starters, I had my endocrine levels tested, and they were all fine. I've had several other friends with fatigue issues at one point in their lives, and (with the exception of one person with post-partum hypo-thyroidism, not running related) none of them have ever had out of whack endocrine levels. I also talked with an endocrinologist colleague of mine about the possibility of adrenal malfunction secondary to intense physical activity and he looked at me like I was from Mars before he politely said,"I have never heard of such a thing." However, I do believe there was some physiologic alteration that was underlying this and that it wasn't just "burn-out" or "all in my head" (That's what all the crazies say, right?). Seriously, though, my resting heart rate was constantly elevated, but even more noticeable was my elevated breathing rate, even at rest. And things just got worse with physical activity. I wonder if this was some sort of alteration in autonomic nervous system functioning, but I don't really have any proof of that either.
Whatever the underlying mechanism, low mileage for nine weeks hadn't helped. Taking day or two off didn't really help, and so the only option I could see was to take time off - completely off, not even any cross training - and truly just REST. (Ryan Hall sounds like he has recently had similar problems and came to the same conclusion, not that I am trying to compare myself to Ryan Hall!)
Three and a half weeks of nothing. People asked me if it was hard to give up running for that long, but really it was easy. Who wants to run when each step hurts, your legs ache for hours after a run, and even the easiest of paces feels like a monumental effort?
My 36th birthday marked my return to running. It seemed symbolic, to start on my new year, but really that was not my intention. The real reason I started running again that day was because a friend called me up and said, "Hey, let's go for a run and then let's get a group together to go out for a beer for your birthday." What can I say, not all decisions are based on profound reasoning. ;)
So I have been back for one month and I feel great. I was definitely out of shape when I started back, but I didn't even care. It was just so nice to have my legs moving in a fluid motion again and no aching afterwards. It is amazing how fast the body progresses and remembers, too. In just 4 weeks my 1000m repeat times have dropped 30 seconds (mostly that reflects how out of shape I was the first week).
During the past month, I have done four runs of 20+ miles. I have felt good on every one, but I am always dead the rest of the day. That is nothing new; I experienced that way before I was an ultra-runner as I remember how much I cherished a nap after my marathon long training runs (in the pre-kid era). Yet the first couple of times, it put me in a panic: "OMG, did I just do too much? Am I headed back to that awful place?!?" But I now see this as acute fatigue, something that is essential in training to signal adaptation in the body and improve fitness. It is tiredness, but is something the body can bounce back from in a day or two. The key, of course, is allowing your body that time to recover, to keep those incidents of acute fatigue from piling up and morphing into something worse, such as an injury or chronic fatigue.
Live and learn. And get plenty of rest.
Posted by Pam at 9:11 PM 5 comments: