What I Really Learnded at Western States Camp 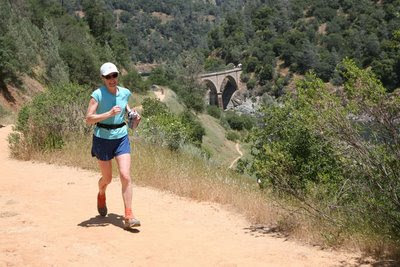 The last three weeks have been awful for me. The week after WS, my legs were like Jell-O. I told myself that was to be expected. But a week later, things weren't better. My quads had no power, I couldn't do speed, and my thighs would be quivering blobs after about 40 minutes. So I took a few days off, then did 8.5 miles with my brother-in-law on a fairly flat paved road and my leg were stiff and leaden the last 2.5 miles. It was so bad, I actually made a doctor's appointment. Excluding OB stuff, that is my first one this century! The good news is that I am healthy as a horse. My hematocrit, iron and protein levels are all about as good as it gets, which is encouraging as a vegetarian - at least I am getting my diet right! And I had a moment of pride when the EKG flagged my test as "sinus bradycardia" (slow heart rate). The downside to being healthy is there is nothing to blame, and no quick fix.

After talking with my doc (herself a BQ marathoner), we came to the conclusion that I just "trashed my quads" - really ripped up the muscle fibers big time with a lot of lingering muscle injury. Hmmm - it seems like a pretty bone-headed thing to do, especially when I was running so well. I don't think the mileage was really the problem at camp, but all the altitude, especially those quad trashing descents - not to mention I probably pushed myself a bit too hard all three days and my downhill technique could use a lot of work!

So what I really learned:
1) Train on the downhills: I have been doing "hill work" the last couple of months, some of it running and some of it hiking, but it is always UP! A lot of the workouts I do on the treadmill, so I never have to go back down. Time to reverse that and get these quads in shape!

2) Take it easy: I did the 74 miles at WS camp at a pretty good pace (14:08 total time, including all stops except the river dip), faster than I would ever expect to race that course. I am sure I could have gone slower and gotten the same value out of the training (maybe even more if I had spared my muscles!). Also, my recovery runs probably need to slow down a bit, too, after talking to a few people about this.

3) Mental energy is everything: Not going to lie, I've been pretty bummed out. I thought I had a pretty good plan for the year: Do 50k's and other short stuff early on, train hard and ramp up the miles in May, June and July to be ready for the long stuff at the end of the year (PCT50, WW100K, and AC100) and then recover/reassess through the winter. At one point in the last week, I was ready to cancel all three of those races! But I finally sat down and thought about what I could be doing. It seemed like there was still plenty of things I could do to help my fitness, plus it was good to remind myself that there are still five weeks till PCT50 and 3 months to AC100.

4) Running Slow is Hard!: Accolades always go to the fast guys and girls, but I think the slow runners deserve a lot more credit! Running at a slow pace adds a lot more time to my workouts. Being stuck at 10min/mile pace on the treadmill has certainly got me thinking about what changes I would have to make if I end up needing to run races slower than expected. In a nutshell: more time, more food, more water, more planning! Just think: if you run a 100 miler in 18 hours, you still have time to get in a hot shower, a good meal and a nice nap before the day is over. No such luxury for the 30 hour runners! Hats off to those at the back of the pack!

So this week has been a lot of very slow three mile runs, some light lifting and lots of stretching. I am hoping by this weekend, I can go "long" which by that I mean something like 8 or 10 miles. That's the distance that used to be my easy Tuesday and Thursday runs with the girls! After that those little muscle fibers will have had 4 weeks to regrow and I'll have four more weeks to get them in shape for PCT50. I'll admit I was hoping for a top 3 finish, but at this point I'll be pretty happy just to finish...and still have working quads at the end!
Posted by Pam at 8:28 PM 1 comment:

Some people are good on the uphill, some the downs. Some thrive on the technical stuff others have a ton of speed. My strength appears to be the ability to run in circles for long periods of time.

Today I got the "official" Titus Van Rijn One Hour Classic results. My distance of 13,510 meters was good enough not only for first woman, but the new female event record. That gives me a pretty good record in timed events, especially as compared to my other ultras (I'm considering TVR an ultra-track event, even though it isn't even close to being above 26.2).

I am pretty happy with my ultra results, but I seem to excel in the loop races. Let me know if you hear of any good PNW timed races!
Posted by Pam at 9:52 PM 1 comment:

When I tell people I went to Western States Training Camp, the most common question I get is "What kind of coaching advice did you get?"

The answer is none. Everyday I showed up, there was minimal direction about the course (but it was marked pretty well), and then I ran. That was it. I talked to several people who have run Western States in the past, but I didn't really get much advice from them either. But that is not to say I didn't learn anything:

1) Medical Tape is better than Body Glide: I did two runs with my low back taped where my pack rubs and one day with just Bodyglide. Only got chafed on the Bodyglide day.

2) Cold water is your friend: I love to swim, but I hate cold water so I don't do it very often. But at camp I was so hot I was splashing in the streams everyday and it felt great. Also I did a post-run ice bath every day. I am not so sure if this really prevents any fatigue or soreness, but sitting in the ice water actually felt really good at the time. And cold water was also my friend in the hydration arena - I drink a heck of a lot more when I have ice in my bottles. Warm water and Heed just don't taste very good.

3) One hundred mile weeks are insane: I got in 100 miles in 8 days (not seven) with camp and I was absolutely WIPED. I still have lingering fatigue. I don't know how people do that kind of training. Fortunately, pretty much everybody I met was running 60-70ish mpw, and a lot of them have finished 100 milers. That helped my anxiety for Angeles Crest.

4) Two salt pills are better than one: I was downing two salt pills on the hour and never had any problems. It also helped to do them both at once on the hour, because I have learned than my memory really sucks when I run. If something like an aid station throws off my routine, I have a really hard time remembering at what time I last ate or took a pill. Doing it on the hour was best, then the interruptions didn't matter.

5) Real ultra-runners use hand helds: I am not fond of my hand-held, but it is something I am working on. It's an Ultimate Direction Bottle and it just seems a little too big around. I am getting to the point where I can carry it with my thumb cupped next to my fingers and not around the bottle, which helps a lot. I found I drink a lot more with the hand-held thsn with my Nathan pack, partly because I could see how much I was drinking and partly because it is tiring to suck the water from the pack. I actually thought I was drinking a lot more than I really was with the pack. Much better to squeeze and be able to see the fluid level at all times.

6) I need heat training!: I was sweating like a pig out there and it wasn't all that hot for that area and time of year. Plus, I am one salty sweater. Time to hit the sauna!

7) Real food rocks: I am lucky in that I really haven't had any GI issues with running. Once I was gagging and dry heaving during a race, but that is my everyday reaction to the "Espresso Love" flavor of GU. I do great with all the fruit flavored GU's, but when it comes down to it, I crave REAL FOOD. I was stuffing my face at all the aid stations and never had problems. I don't think I would have ingested near as many colories if I was only consuming maltodextrin paste the whole time!

So there you go. Who needs a coach to learn new things.
Posted by Pam at 8:02 PM 1 comment: