Ultra Husband and The Free Bottle of Wine

I consider the 2008 McKenzie River Trail Run was my first official ultra and I LOVED it. The course is beautiful and very runner friendly with 3,000 feet of elevation loss, but enough technical footing to make you feel like you worked hard for your finish. I was excited to go back this year, but I was even more excited for my husband who was running his first ultra!!

After AC, though, I knew racing was out of the question. I just don’t seem to have my “race legs” under me right now and I knew I didn’t want to just try to survive another race. I considered running with my husband Mackenzie (aka Mac, but I am using his full name in honor of the race!), but in the end I decided a complete break from running was in my best interest.

So last week I e-mailed the race director telling him that I wouldn’t be running, but that I’d still like my goodie bag.

OK, normally I wouldn’t care about picking up a cotton T-shirt, but this year MRTR was giving out Free Bottles of Wine! Now, I am not even that much of a wine drinker. But this was a Free Bottle of Wine, so I wanted it very badly. Plus, I felt like it would be super sneaky to get a Free Bottle of Wine from a race where I had Free Entry; I’d be achieving a Free Double Whammy! (Did I mention I am cheap??).

My parents graciously agreed to babysit the offspring, so Mac and I set off Friday night for McKenzie Bridge, two care-free cool cats, looking stylin' as we cruised down the highway in our mini-van.

We stopped at check-in, where I reminded them that I wouldn't be running, but still they just handed me my Free Bottle of Wine without any hesitation. They didn't even card me! 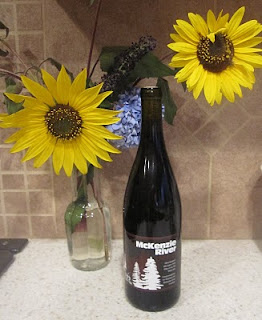 The exalted Free Bottle of Wine

After dinner, we headed to our cabin at Cedarwood Inn. We had a king sized bed and no kids, so you know what that means. That's right, we went straight to sleep without even reading any bedtime stories! Good thing, too, cause Mr. Nervous got up super early to pin his number on four different ways, fidget with his Garmin, and tape his nipples. It took me back to 2008, when the night before McKenzie River, I tried on four different sports bras and made swinging arm running movements in front of the mirror trying to decide which one to wear in the race, even though I had logged hundreds of miles in each of them.

On our drive up to the start, there were several insane people hitchhiking on the highway, but they were holding up race numbers, so we could identify their psychosis as masochism and not serial killer-ism, so we picked up our first hitch-hiker!! Woo-hoo - a lot of firsts going on this weekend!

We hung out with a lot of the Corvallis crew until the start. After the runners were off, I helped a friend shuttle cars to the finish. We got done just in time to make it to AS#1. We got to see the fast guys on their way back from the 1.5 mile out and back and everyone from about 10th place down going both directions, so we did lots of cheering. Unfortunately, when it was time to leave, my mini-van had become a medi-van as two runners had taken nasty tumbles in the lava rock sections and were out for the day. One of the casualties was my friend April who was keeping Mac company on the course when she rolled her ankle and ended up with a bad sprain (Mac was obviously charming the ladies right off of their feet). I hated to see her day end like that, especially since she was one of only three people (and the only woman) on track to finish all seven of the Oregon Trail Series Races, but I did really enjoy her company for the rest of the day as I crewed Mac, helped a few Salem friends, and cheered for runners.

We were befuddled by construction and running late from the injuries, so we didn't make it to AS#2, but got to AS#3 early enough to see all but the first six guys. Mac looked good, but was pissed about the five yellow-jacket stings he had taken in the last section.

On to AS#4. Mac still looked good, but he had lost his appetite. He kept staring at the AS food, but couldn't find anything to eat.

We skipped AS#5 and went straight to the finish to see many of the people we knew finish it up. Mac finished his first ultra in 5:49!! I can't exactly say his face was glowing with pride as he crossed the line; it was more like a pale green tinge with vacant eyes. But he did it and I am super-proud of him! You can read his account here.

(* - By "my" I really mean Mac's because we are married and what's his is mine. It may be shallow and trivial, but it is still a Free Bottle of Wine and I am not giving it up that easily! Besides, Mac has pride and self-satisfaction from MRTR, all I have is the Free Bottle of Wine!)