Mad City -All The "Gory" Details

Thank you to a couple of my close friends who told me my previous report on Mad City "sucked" and didn't have enough detail, because now I feel like I have full license to babble on endlessly! Be careful what you wish for!!

Spring break was three weeks before Mad City and I took it off work to be with my kids, but it also provided an opportunity to really up my training. I had a huge week (by my standards), getting in 96 miles. I was feeling pretty good about myself until I had this stupid idea to repeat Monday's track workout on Friday and then follow it up with a long hard Saturday, including tempo. The following Monday, I had a miserable 3x2 mile on the track and things never really got better the rest of the week till the point that Tuesday before the race I was panicking big time. I frequently have that anxiety/fear factor a few days before a race, but this time I even unleashed all my baggage on a few of my friends and started complaining that I felt too tired to race. Fortunately, they were very supportive, even if they do now think I am completely mental. Hey, I am not denying it; I just usually try to hide it better!

Anyway, I ended up taking three days completely off before the race - not my typical plan. I don't know if my body needed it or not, but I think my head did. Friday, instead of running, I walked around the Henry Vilas (free admission!) zoo. It was a cold and overcast day, so I found myself alone at the tiger cage. As I watched "Cyber" pace back and forth, a calmness came over me and my fear dissipated. Unfortunately, my zen moment was ruined when "Eye of the Tiger" popped into my head; it is hard to exist in a tranquil state when you are mentally singing Survivor songs! I decided to go with it and started rocking out for real to the song on my iPhone (my husband downloaded it, I swear!). 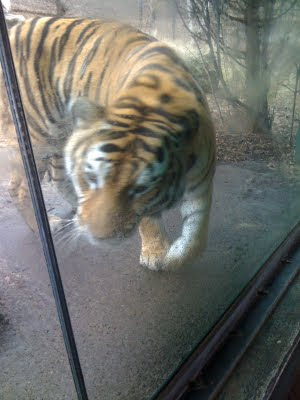 "Rising up, straight to the top, have the guts, got the glory; went the distance, now I'm not gonna stop; It's the Eye of the Tiger, It's the thrill of the fight..."
I knew I was as ready as I was going to get! 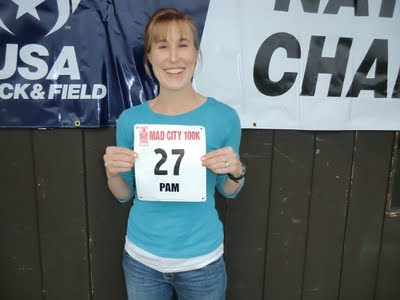 "I'm ready, ready to run." Wait - that's not Survivor, that's the Dixie Chicks!
The weather report even the day before predicted 70+ degrees and thunderstorms, but the weather was actually perfect all day: 50's and overcast, with SUN right after I finished. It was just a little chilly at the start, but apparently no one was in a hurry to get warmed up too fast, as the lead guys all took off really slowly and didn't really get out in front. In fact, I ran for over a mile with David Riddle, the men's second place finisher, before he picked it up. Devon Crosby-Helms was close on my heels, until she caught up to me at the 5k mark. That's when I joked with her that I was planning to tell everybody we were in a sprint finish (figuring that she'd be about a half hour ahead of me!) and she elbowed me to get ahead! To my surprise, she didn't immediately gap me and instead we ran together for the next two loops, which made for a very enjoyable 10 miles. 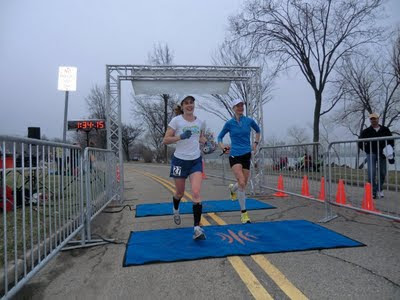 Devon and me through loop 2. This picture is way better than the Examiner photo of me and Devon, because I am a half step ahead of her (hey, live it up while it lasts!) and I don't look like a midget! ;)
Devon did get a bit of a lead after the second loop, but I stayed pretty close behind and just dogged her for the next couple loops. Even by lap 4 I was starting to feel the beginnings of fatigue - nothing major, just that little bit of achy-ness and enough to very definitely notice what parts of the course were uphill. Lin Gentling, the US Team manager jogged by me on that lap and yelled, "Just run your own race, Pam." I think she worried that I was actually running Devon's race and not mine. Indeed, I was going a lot faster than I had planned, but it just felt like the pace I should be at. I came through the half-way point in 3:53. My 50k PR is 3:51, so essentially I was attempting to run 100k at my 50k pace! But my 50k split didn't worry me at all, in fact I was elated to know I could run 9 minute miles and still get a team qualifying time and about 8:30 miles for the entire second half and still come in under 8:18 (the time I figured I'd need to beat to actually get on the team).
Starting around lap 5 I kept telling myself, "just go run a fun lap," meaning it was OK to back off the pace just a bit, but the luxury of being able to do that was really all I needed to stay mentally strong and so I never felt the need to consciously slow down.
At the beginning of lap 6, I found myself closing on Devon and caught up to her on the biggest hill. She said she was suffering from lack of motivation and wasn't having fun. I did what I could to encourage her, but when she stopped for a bathroom break, I pulled a bit ahead.
Well, on lap 7 at just abut the same place I caught Devon 6 miles earlier, she comes flying by me with a big grin, stating, "I found my motivation!" She was super supportive and urged me to stay with her, but when that girl says she finds her mojo, she really finds her mojo!
I stayed within 45 seconds through the 50 mile mark (calculated split at 6:17:26!!) but Devon seemed to be anti-fatiguing!! My final two loops were understandably my slowest on the day, but I still felt really good about my pacing with a 49:04 final loop and a 3:59 second half. But Devon was an animal on these two laps, running her fastest split on the final loop (45:07 - holy cow!). I broke Meghan Arbogast's course record by seven minutes, but how can I compete with someone who negative splits a 100k?!? 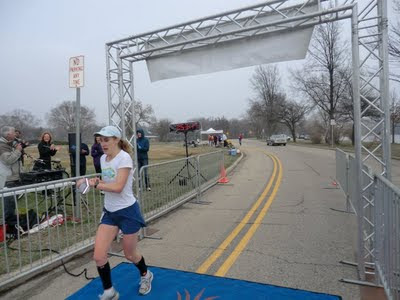 Finished! 7:53:17. Thank goodness, too, because this picture makes me look like I couldn't run a single step more! 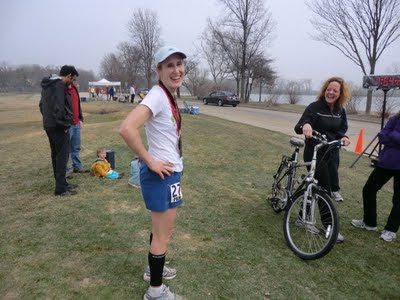 Don't I look awesome for having just finished a 100k? Don't believe what you see- I was totally hunched over gasping for air, but when I saw a guy with a camera running toward me, I stood up and put on this sh*t grin. A millisecond later I was on my back in the grass!
Though I have joked about always being "first loser" (American River, JFK, Bandera and now Mad City. hmmm-it is not exactly joke, is it?), I am ecstatic by my race. My main goal was to get on the US 100k team, and I am so excited to have a time that will likely get me on the team for the next two years! Kudos to Devon for such an amazing finish. She is truly a worthy champion and I feel so honored for the opportunity to represent the US alongside her and the other amazing women on the team.
Posted by Pam at 8:36 PM 5 comments:

This morning (and early afternoon) I ran in the 100k Road National Championships in Madison, WI. I am psyched to report that I hit my "pie in the sky" goal of sub-8 hours (7:53:17!) and earned a spot on the US National Team going to the World Championships in Holland this September! This was a BIG goal for me for 2011. I am so excited, honored and proud for the opportunity to represent my country and run with such amazing women, both as my teammates and as international competitors. And since the 2012 World Championships are early in the year next year (April - Italy), today's race most likely got me on the team for next year, too - yippee! (which relatives want to babysit??!)
While the idea of running a road ultra isn't most ultra-runner's idea of great fun (I admit I had some reservations, too), I am so inspired by the idea of competing for the USA and having so many people from different countries come together to celebrate running, and specifically ultra-running, that I made this my main running goal for 2011 (Woohoo- I have achieved my Big goal for the year and it is only April. Yeah, I was the nerdy girl who always turned my homework in early, too!). And don't knock road ultras till you try it: the scenery was nice (around Lake Wingra in Madison, WI), you saw a lot more people on the course than a point to point (from lapping people or getting lapped), and they are really frickin' hard! I think I hurt more after this than after Western States. Thank goodness it was over in 8 hours!
Here are my splits.
Congrats to Devon! We ran a couple of laps together, but then she buried me at the end. It was because she threw a gnarly elbow right in my rib cage, knocked the wind out of me and then took off sprinting when I couldn't breathe. OK, not really, but I told her that's the story I was going to tell people and she seemed OK with it, so just go with it. I am! Here's a pretty good pic of us running together, before she elbowed me. ;)(I am 5'5" in case you are wondering if I am a midget after seeing this photo!). Kidding aside, Devon had a great race and I really enjoyed the laps we ran together. 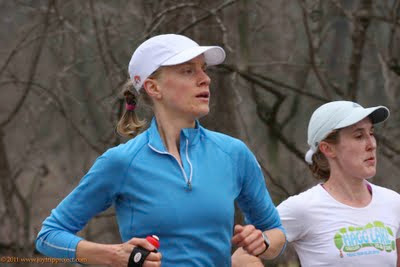