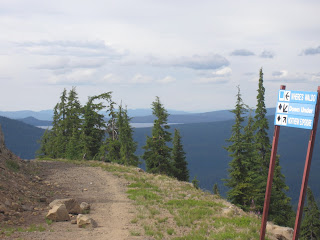 Where's Waldo Ski Run with a view to Waldo Lake
Last year, Where's Waldo 100k was a disaster for me. This year it was one big party. While I would have liked to get my redemption on the course, it'll have to wait till next year, as the race conflicted with Angeles Crest this year. Instead, our family camped out at Charlton Lake and worked the Aid Station there (mile 32) on race day. 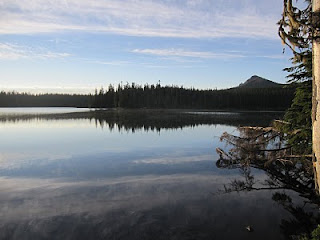 Early Morning at Charlton Lake
We camped right on the lake and woke to serene beauty. The quiet was especially appreciated since the campers next door were partying late into the night. The silence was quickly broken by my two kids who provided a little early morning payback noise for our hung-over noisy neighbors!
Not long after daybreak, we were setting up our surf station for the runners. Tim Olson came flying through just after 9:30. He dropped his bottles, grabbed two new ones from his wife, and was out of there in a flash, leaving all of us standing around idle with our jaws hanging open. But soon enough, we had a steady stream of runners looking for food and a fluid refill. 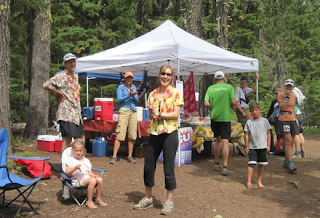 Surf's up at Charlton Lake! 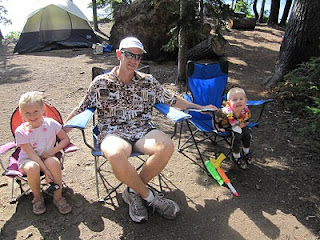 The family cheers on the runners 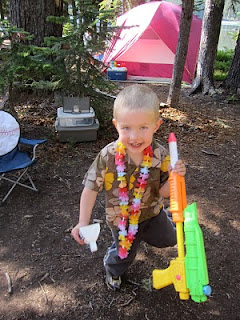 Liam with very fashionable and eclectic accessories: A Cowbell, a Lei, and a Machine Gun
Our aid station had a cutoff at 1 pm, so we had time to clean up and get to the finish line. But why would the kids want to watch tired, dirty runners stumble across a line of chalk when there was a huge gondola sprouting from the finish line?? 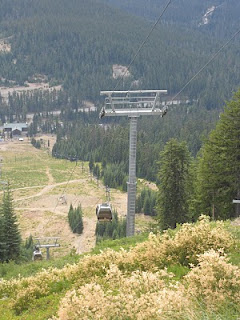 So we went for a ride up the mountain, hiked around, and rode back down. After enjoying the BBQ, we rode up for a second time, because who can get enough gondola? Ok, well maybe Mac and I had our fills, but the kids thought the second ride was just as exciting as the first. 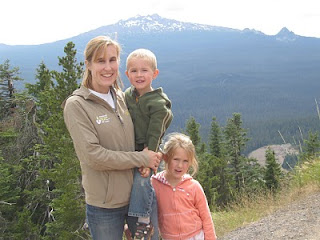 The Charlton Lake Crew all camped out by the lake again Saturday night along with Corvallis Waldo finisher, Mikio, who was moving around remarkably well. We enjoyed a big bonfire but nothing to rival the debauchery of our fellow campers, who were at it again late into the night (and early morning!).
The next morning Mac got in a nice three hour run on the trails (with a Twins summit!) before we packed it up. 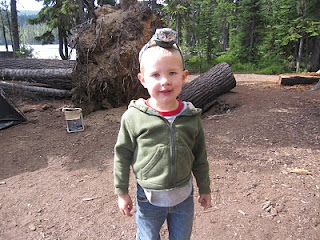 Yeah, that face is filthy. Don't judge; we are camping!
On the way home, stopped at the Willamette Fish Hatchery, which was the coolest fish hatchery ever, and I am qualified to say this because I have been to a lot of fish hatcheries for some unexplainable reason! 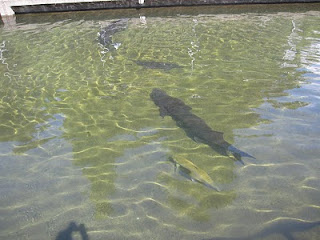 The breeder sturgeon and trout 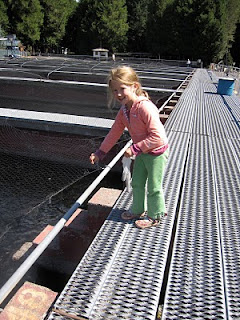 Free food! Fish food, that is. 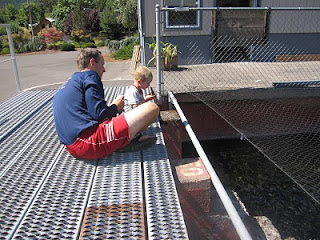 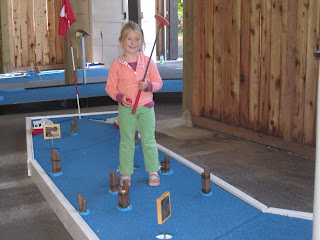 A round of "educational fish golf" to wrap up the weekend
It was a great race weekend with none of the pre-race jitters!
Full results here.
Posted by Pam at 7:11 PM 2 comments:

Being Realistic at White River

This weekend the 50 mile National Trail Championships were held at White River in the shadows of Mt. Rainier. There are only two climbs on this course, but they are 11 miles and 8 miles long, each followed by jarring downhill sections of similar length. After the 3.7 mile gentle start to the first aid station, the only other flat section is the final 6.2 miles on the rolling Skookum Flats trail, which comes at a time when you are too tired to really appreciate it. This made for an incredibly challenging course, but the beauty was stunning. There were great views of Mt. Rainier looming above, dense coniferous forests, and nearly 20 different kinds of wildflowers in bloom, all on a perfect 75 degree sunny day.

White River has been on my radar all year, but I didn't sign up until the last minute. I have been feeling so blah and tired since Western States, that it just didn't seem like a good idea to run another major race so soon. But somehow over the course of two weeks, my mind transformed this bad idea into a good idea and so I signed up. I knew I wouldn't be at my best, but I knew the course would be beautiful, I thought it might bolster my waning motivation, and I knew it would probably be the only major run between Western States and Angeles Crest. But in the days leading up to the race, I was still kind of dreading my decision - 50 miles is a LONG way to run when you are already tired! In fact, I was really looking forward to the trip more than the actual race, as I was carpooling up with Amy Sproston and Yassine Diboun, two awesome runners I was excited to get to know better.

Before the day started I told a few people that I would like to be around 8:30 on this course, but 9 hours was probably more realistic in my current state. Reality slapped me in the face as I finished in 9:00:47!

I had a few estimated splits in my head for 8:30 pace, but from the get go, I wasn't hitting them. Nothing ever went terribly wrong on the day, in fact, a lot went really well: my food and fluid intake was really good, I stayed pretty consistent, I only took six S!-caps (heat training kicking in!) and I moved up as the day went on. In fact, I started in 55th/7thF and moved up to 35th/5thF by the finish.

There was only one minor disaster and it didn't cost me too much time: With about three miles to go, I caught a toe on the very technical Skookum trail and I came down flat on my chest, knocking the wind out of me completely. Isn't a reflex to put your hands in front of you when you fall?? Was I really so tired that I couldn't even move my arms into a position to protect myself? Well, hey, at least I didn't break a nail. I came up moaning with every breath and had to walk for a bit (at least enough to add 48 seconds to my time, I am sure ;) ). As an added bonus, a mountain biker saw the whole thing and made a point of telling me how bad the fall looked. What a helpful guy!

Even with the fall, there still wasn't one thing or one section that went particularly wrong. I was just running about 3 minutes per section slower than I had hoped and those minutes add up after 50 miles!

Though my time wasn't as good as I would have liked, I still am really glad I went. It was easily the most beautiful course I have been on. I had a great time catching up with old friends and making new ones, and after two years of ultra-running I finally crossed paths with my college classmate, Greg Crowther. But what helped me the most was talking to people about recovering from a 100 miler. It was nice to hear that it was normal to still be tired and flat five weeks after putting yourself through the ringer! Even Meghan and Anton admitted that they had a hard time recovering after their first 100 and that the recovery has gotten faster with experience. Sometimes you know those things deep down, but still need the reassurance anyway. 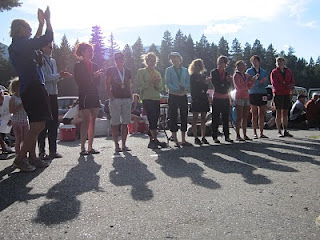 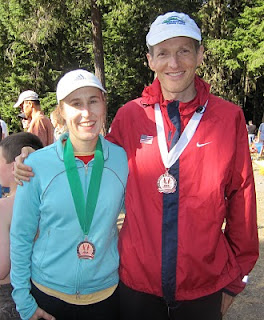 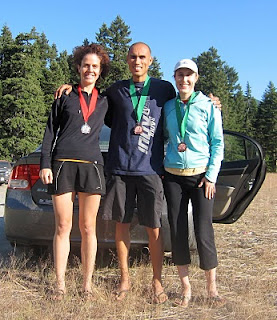