I met the Monday morning tracksters for one last run (a very abbreviated workout for me) before leaving. Because it was Labor Day we met at 7 instead of our usual 5am, which actually feels like sleeping in these days, but it meant I had to scramble to get ready to leave.

We dropped the kids off with Mamaw (Mac’s mom – huge thanks in order). The kids seemed to take our departure fairly well. In fact, Liam was sad he didn’t get to stay with Mac’s mom when she arrived on Sunday, for as he explained to me, “Mamaw is better because she lets us eat junk food and she takes us to Chuck E. Cheese’s.” Megan was more interested in Sesame Street than me as she said goodbye. But at least they aren’t traumatized by our departure!

The USATF advised us not to wear team gear while traveling so as not to draw attention to ourselves as Americans. So I wore a pair of jeans and a plain shirt as I carried my USA backpack and toted my USA suitcase through the airport and train stations. Subtle, real subtle. But we somehow managed to avoid terrorist attack.

Actually, when we got into the airport, I was struck by how globalized everything has become. The Russian girl next to us in the train line had on Converse shoes, an O’Neill backpack and was playing on her iPhone. The athletic gear is all the same brands popular in the States. And the food court was serving up Burger King and franchise coffee. I might have been okay with it had it been Dutch Brothers, but it was kind of disappointing that the first thing I saw after passing through customs was a Starbucks!

After the all night flight, it was about another four hours to Winschoten by train. We had information that we could get a shuttle to the athlete’s village, but the train station was a ghost town and the station itself was completely closed down! It did not help our mission that there is not a single public phone in the entire town! And the townies were pretty clueless that there was an international race taking place that weekend. We kind of kicked ourselves for relying on the USATF plans of “there will probably be a shuttle.” 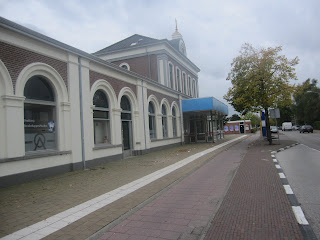 Mac (who hasn’t always kept his cool in confusing situations) was totally calm and suggested we head to the library.

“Well, that’s a really good idea, but I am sure the library is closed on Sundays,” I told him.

“Yeah, but it’s Tuesday.” Right. That is why I hated my surgery and OB rotations so much – my brain does not function without sleep! 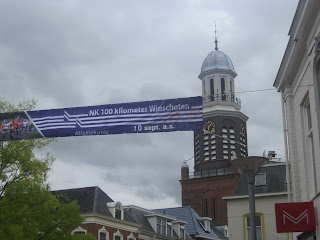 The banner signals we've come to the right place!

After what felt like a video game quest in cold windy weather (go to town information, go to the library, go back to information, go back to the train station, go to town to find a phone, pay a hotel clerk to use the phone, go back to train station to wait), we got in touch with the athlete’s village and 20 minutes later Hedda was driving us to a very nice athletic facility with little apartments for our quarters. This place is way outside of town and we don’t have a car. We seem to be one of the first to arrive so the compound ispretty dead. We’ve just been wandering around with wide eyed stares from the isolation, lack of sleep, and mild culture shock. Two teenage girls showed up at our door with two bags of food, so at least we aren’t starving. 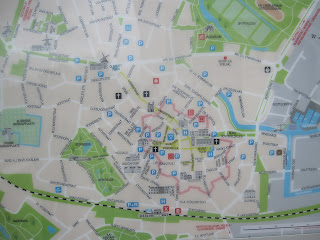 Map of Winschoten - It felt like we every number on the map!

The rest of Team USA arrives tomorrow and we have our first team meeting, so hopefully, we have a better sense of what is going on after that! We are also keeping our fingers crossed that the weather gets better. The wind and the rain we've had so far may negate the pancake flat terrain for fast times times this weekend. Despite the confusion, we've had lots of laughs being idiot US tourists!