The kiddos and I had a fun weekend down in Sacramento visiting Grammie and Grandpa for the weekend. Oh yeah, there was a little race, too! Meanwhile, Mac was off running R2R2R, but that's his story.

I am not quite sure what to say for this race report because I am not quite sure how I feel about my race.  Sure, it is fun to win, but I always say you can't really judge a performance based on what place you get. That being said, I clearly remember a finish line conversation from a few years ago where a woman who beat me went on and on about how terrible her race was and I kind of wanted to punch her in the face because she finished ahead of me and I didn't think my race was all that bad. So I am not so sure I want to be overly critical of my race, because I don't want any violent thoughts against me! Maybe it is best just to say AR was the steadiest, most in control race I have ever had and probably the most fun.  I think the pictures do an awesome job of conveying this. And through the magic of Facebook plagiarism, I have lots of them to share here!

So here's the run down:

I got my carbo loading in at the Jelly Belly Factory on Friday morning and showed remarkable restraint with the Jelly Bellies, eating only half of my sampler bag before the race!
I completed the carbo loading at the prerace dinner  with Jimmy Dean Freeman and his wife Kate. Jimmy gave a humorous and poignant motivational speech for running American River. I must have been paying attention! 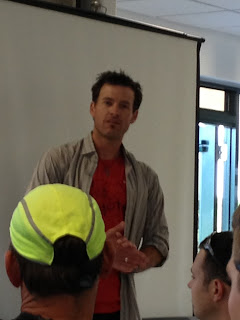 Jimmy Dean gives some pointers. Pre-race dinners with the Freemans have been very good for my racing (also Miwok). Kate has generously agreed to be flown to any locale to
eat with me before a race.

Race morning was cool, but I knew it'd warm up, so I opted to go without a race vest. Instead I wore my shorts with the most pockets and had my "cheeks" stuffed like a chipmunk at the start of the race. Right before the start, I ducked behind a very public parked car and tried to discretely empty my bladder one last time. After peeing on my shorts, I was ready to rock!

Tera Dube joined me on the bike path around mile 2 or so, and I had the pleasure of running with her for about 15 miles. We swapped mom stories and Western States horror stories before joining up with Andy and Andy, two friends from Reno. When they asked us how we knew each other, we laughed and said we just met.

My plan was to be in the 7:20-7:30 range for the paved section, and we were consistently 7:21-7:24 with one 7:17 thrown in just for a little variety. The others in the group would periodically say it was a touch too fast, but no one actually slowed down. I felt easy and smooth so I certainly wasn't going to be the one slowing us down.

Right before the climb up the Folsom Dam at mile 19, we caught a couple other guys. I latched on to them up the hill and the rest of my group fell back and that was the end of our foursome.

At the top of the trail, the two guys I was following tried to go straight across the parking lot and up the fence line. I remembered the course running through the parking lot and when I looked to the end I saw an orange flag. I yelled at the two guys and got them back on course. When they caught back up, I joked that they owed me one. One of the guys said he'd hold down any of the other women if they tried to take the lead from me. I told him I hoped it wouldn't come to that, but if it did, I'd take him up on the offer.  Fortunately, it didn't come down to that. ;)

Over the next few miles, there were a few times where I'd catch up to somebody, briefly make a new friend and then gradually pull away. I hit the marathon in 3:12 and Beal's at 3:14 and left with good company: Galen Farris and his pacer Jenn Pfiefer, who I ran with through most of "the meat grinder" section, until I pulled ahead a bit right before Rattlesnake Bar. There I picked up my pacer, Mo Bartley. 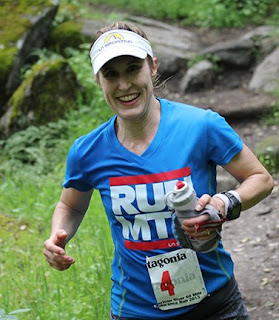 Mile 38 and looking great! (IMHO, of course. Oh, just let me enjoy it; I usually look like shit in race photos)

Mo is a super awesome runner and super awesome person, who finished as high as third at Western States, was on the 100k Worlds team, and had several American River podium finishes of her own. At 58, she is still going strong! She paced me my first year at WS and it was a last minute surprise when I found out she would be pacing me again. It was great to spend nine miles catching up with her and gossiping like school girls! I ended up "power hiking" about a third of the Wall section, but ran everything else. We cruised on in for a 6:54 finish, 6th overall/1st female. 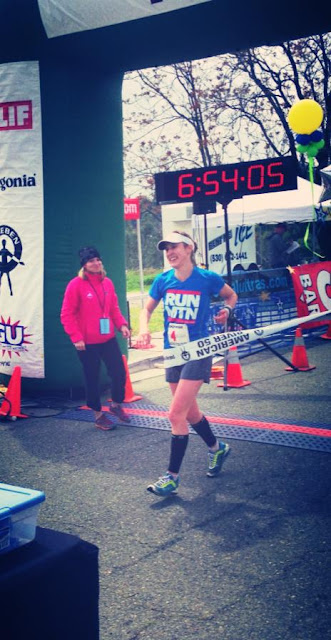 I felt great the whole race and was more chatty than I was in pretty much all of my races from last year combined! I never had that "Oh dear god, when will this end" feeling or really a sense of suffering at all. As I told a friend, I was more tired at the end of a 30 mile training run 2 weeks prior than I was at the end of this race, and that's what's bugging me a little bit about this race: I don't really feel like I gave it my all or that I worked as hard as I could have. (Ok, I hope you do not want to punch me in the face right now!). It was a good race for me, I felt strong all day, and of course, I am psyched to get the win, but I did not hit my "A" goal of 6:50, and I kind of feel like it was maybe because I didn't try hard enough. I never really got passed by anyone all day, but with around 7 miles left, my pacer and I looked back on a curved section and saw a shirtless guy about a quarter mile back and I remember thinking, "If he catches me, I'll pick it up and run with him to the finish." If you think you can run faster in a race, shouldn't you? And shouldn't the mentality be, "There's a guy behind me; I'll pick it up now so that he doesn't catch me."?? Am I getting soft and lazy in my old age??

I know it was a good run, and there is even a rumor that my last 9.5 mile split was only 3 minutes off the men's winner (I never actually saw any splits and that might not be saying much because I think the men's leader was hurting at the end), but I caught myself telling a friend it was the easiest 50 miler I have ever done. As a non-ultrarunner, she definitely wanted to punch me in the face for calling 50 miles "easy." And while AR is known for being an "easy" course, I don't think that means the race should feel easy. In fact, I have never been more sore, more tired, or more beat up than after the "easy" 100k's and 100M that I have done on road/track. 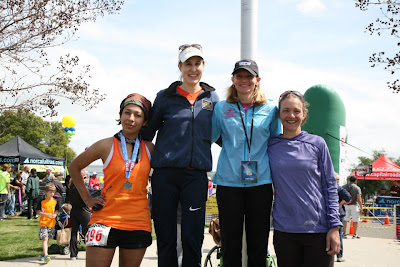 On the bright side, I had almost no soreness after the race (also, due to almost no downhill on the course) and on Monday I could already hover over public toilets - no hands, even with a full bladder! The Monday after Desert Solstice, I couldn't even sit down on a toilet normally! (Toilet agility being the ultimate barometer of recovery, of course).

Sunday, we got out for a nice recovery hike to Hidden Falls with the family, a great way to cap off the weekend before heading home. A big thank you to Julie Fingar for a great race and for giving me the opportunity to compete (now 3-0 for races where I "begged" entry!) and thanks to all the other volunteers. And thanks Mom, Dad, and Uncle Roger for entertaining the kiddos all day while I was off running.

Here's a link to the Auburn Journal article/interview. When he asks me if I was looking to win, I kind of want to punch myself in the face, but other than that, it isn't too bad.

Next up is a "tiny" 50k in Oregon (sorry, Dennis and Ken!) and then Western States! Time to live up to my shirt and "RUN MTN"! (instead of just wearing it in mostly flat and paved races). 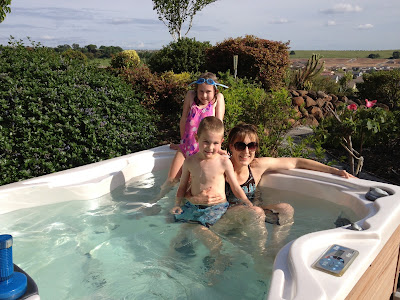 The best part of staying at my parents' (well, besides the free baby
siting, the free bed, and the free food) - post race hot tubbing! 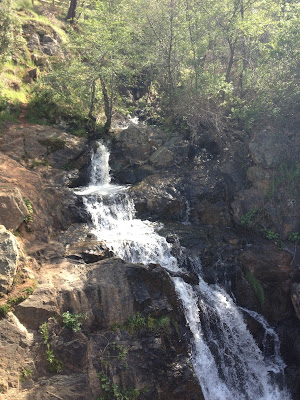 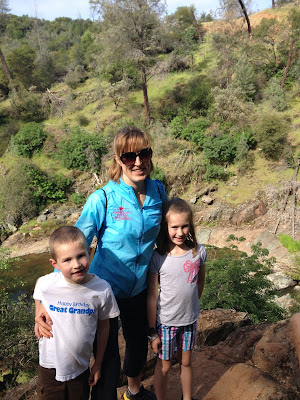