This year I am mostly focusing on the Oregon Trail Series Races, because they are (relatively) close to home. Also, even though there are tons of awesome ultra-runners in Oregon, the stud-women all have bigger fish to fry (like 100K World Cup and winning prestigious 100 milers) and don't pay any attention to the OTS, which means I stand a good chance of being competitive in the series. Points for the series are multiplied by the number of miles in each race, so it doesn't exactly take a genius to figure out that you need to run the long races to do well. That boils down to the PCT50 and Where's Waldo. But sometime in March I decided I should complete a 50 miler before trying to race a 50 miler and so I signed up for Capitol Peak.

I billed Capitol Peak as an "accomplishment run" and repeatedly tried to enforce the notion that I wasn't out there to race. Just get it done. It seemed simple enough. 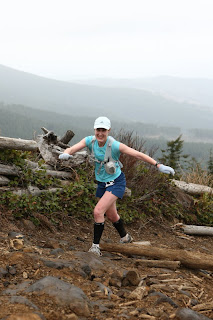 I took the first 19 mile loop very easy and had the pleasure of running most of it with other people, which is rare for me; I always seem to be on the trail by myself. I was strong on the 5.5 mile climb up to Capitol Peak and even ran quite a bit of it. In fact I was passing people! And I made good time on the little loop up to the peak. I hit the top third for the women, behind super-star Jenny Capel, who went on to win the 50 mile, and just a couple minutes behind Alison Hank, who was out for a shorter day, winning the 55k.

As I came down from the peak, I got back on to the dirt road and there in front of me was a huge white arrow pointing to the right. That didn't seem right since I could see the parking lot straight ahead and thought the aid station must be right next to that, but how could I ignore this gigantic trail marker? I look where it is pointing and see two runners ahead and one of them is a woman! Aha - that must be the right direction and I think I can catch that girl! I run down the road, and something does NOT feel right. Where is the AS? I catch the girl and ask her where the aid station is - she says we just loop up the trail and then drop down to the AS. Sounds good so I keep running. Then I pass a sign that looks eerily familiar. "Well, they probably just made two of the same signs," I tell 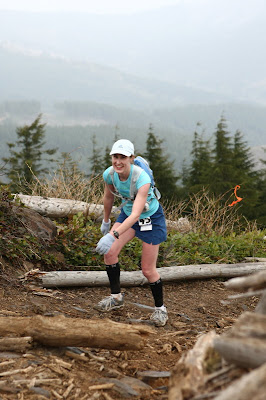 myself. But on the trail I cross a snow patch and now I am almost certain I am retracing my steps. A few feet farther and I see bricks that I had noted on my first time up. Now I know exactly what has happened: That big arrow was for the people coming UP the mountain; on the way down you just cross the parking lot to the Aid station. You had to be a complete dumb-ass to screw that up. So my only explanation is that I am a dumb-ass!

Normally, I would say that I am good at following directions and maps. Directions are so logical and orderly - things I thrive on. There is no room for creativity with directions, which is good because I don't have much creativity. But now I have gotten lost in two consecutive races. That just seems like poor sense of direction and poor common sense!


By the time I got back on track I had traveled an extra three miles. When the AS captain asked if I was continuing on to do the 50 mile or going with the 55k, I let my anger and frustration make a bad decision for me. "I am just going to go straight down," I told her and so opted for the 55k.
(photos by Glenn Tachiyama)

On the way down the hill, I was surprised how slowly I was going. Gravity didn't seem to have its normal pull. "I am really tired," I reasoned, "good thing I decided to call it a day." But when I got to the finish, I didn't really feel so spent after all. I stayed around the finish long enough to see 11+ hour runners coming in and I felt ashamed: even with my detour I would have been done way ahead of this. These people had true guts, and for them there was glory. I had no glory, just a mug (age group win in the 55k - blah!). If I am being honest, I have to say, I got scared. That was the heart of the matter. Not being tired, not being frustrated. At that point 23 miles seemed like a really long way to go and so I just chickened out.

The application for Western States 100 mile run says: "Running Western States hurts for a few days; getting a ride back from an aide station hurts all year." Fortunately, this wasn't as big as Western States, but it was a great illustration of the message.

Some good did come of this. I felt good after 35 miles and I know I can do 50 now. That should take away the fear factor for next time. Plus, I will be damn committed to finishing what I start from now on, because now I know how much quitting stings. It wasn't a great day of accomplishment for me, as I had hoped, but it was a great day of personal growth.
Posted by Pam at 2:28 PM No comments:

I would have liked to title this entry "The Rumble Of The Rookies And The Showdown Of the Smiths," but I think that would be an egregious overstatement of my proximity to the eventual winner, Caitlin Smith. So instead, I just have "the Rumble Race Report" :

Sunday dawned clear and cold, shivering-my-butt-off cold. At the start I was on the back of a small pack, including two other women, Caitlin and Jenn Shelton. There really weren't any other women around by the time we turned on to the trail. Jenn stopped at the first Aid Station, and Caitlin pulled ahead and just kept up an impressive power chug up to the top. In fact, the only time I was able to catch up to her at all was when she stopped to pee and when she was (wisely) more tentative than me on the very slick ice fields. As long as she was running, I didn't have a chance. Too bad for me there wasn't a hell of a lot more ice on the trails! ;) I fared pretty well on the wide flat section, but on the downhill trail, Caitlin was off in front once again. I was picking my way down a bit more gingerly, but still managed to take a major digger. I went down hard, but I did a really awesome job of protecting my worthless hands by landing on my knee, chest and shoulder - aaargh! I got up and seemed to be ok as I made my way into AS5 (~20 miles).

I knew I wasn't going to catch Caitlin so I eased up a little on the road stretch but then really started feeling tired as the course started going back up. Near the first plateau, I just kept moving along the road when I come to a T-intersection and nothing is marked. I turn to the right and after about a minute I see this road turns into a driveway for a horse ranch. Hmmm - that doesn't seem right. I start walking back, waiting for someone else to come by. About 30 seconds later there is another runner on the road and he is not really happy that I don't know where I am going; obviously, he was following me. He walks down the other way of the intersection and I notice a little trail coming off that road so I walk down it for 30 seconds or so. I still don't see any markers and I know this has been a very well-marked course. Finally, I tell the guy I am going back the way I came. We jog back for just over a minute and then I see a runner on the other side of the creek and figured we must have to cross it. I go over to the bank and look for a way to jump across and not ten feet from where I am standing is a plank walk-way over the creek with a yellow course market ribbon hanging above it, as clear as day, but I had missed it nonetheless. It felt like we were lost for an eternity, but I think it was really only like 6 or 7 minutes.

Back on course, I could see three early start runners that I had already passed that had passed me back on my "detour." I was sure this meant the third place woman had passed me, too, since we had all been pretty close earlier on. I started running thinking maybe I could catch her again, but a few minutes later I was on my face again. It wasn't a bad fall at all, but I just kind of mentally lost it. I kind of remember thinking,"Whatever - third place is fine" and I just started walking. At one point the words "Disaster of epic proportion" popped into my head. A little melodramatic and certainly not my finest moment! After five minutes or so the trail seemed to be approaching the top and I started jogging again as it flattened out. 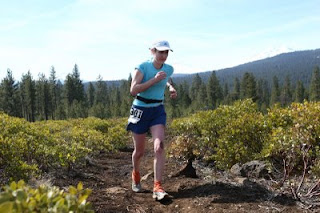 At the penultimate aide station I took an S-cap, a GU, and a handful of food. I was especially delighted by the pink marshmellow chicks, which seemed amusing and festive, right when I needed a little spirit boost. I think that all did the trick, because I started feeling better and was able to run OK.
(photo by Glen Tachiyama)

Coming into the last Aid Station, they were all business: "What's your name? What's your number?" I thought about asking them what place I was in, but I was actually worried that they would tell me I wasn't even in third any more, so I just kept running. The prospect of the finish line was obviously a motivation to my weary body as I managed around 8:10 pace for the last four miles. When I got to the finish (5:02:27), a couple of guys congratulated me and asked me what place I got. I was serious when I said I didn't know! Turns out I was second; I hadn't gotten passed on my detour after all. And even better - there was plenty of warm sun to lay around in after the race!

My goal was to finish under 5 hours, which I missed by 2+ minutes, but from this side of the finish line, I don't think I'd dub it a "Disaster Of Epic Proportions". I had a bit of a rough patch in the middle, but the day was gorgeous, the people were friendly and the race was well organized. I am looking forward to more Oregon Trail Series Events.
Posted by Pam at 2:36 PM 2 comments: