Aaaah - just a day of rest (ok maybe two if you count those pathetic three miles on Thursday) and everything feels so good again.

I went to meet the gang at the Governor's Cup this morning and was surprised to see such a big turn-out. I guess with the onset of spring, runners are coming out of hibernation. There were Saturdays in December where we only had four of five people!

I was ready for a nice easy long run, but Gordon says he and Terra were thinking about doing 3x15 tempo at 6:50. Whoa - that's way too fast for me today I tell him. "What do you mean? That's marathon pace." None of us are sub-three hour marathon runners, so I am not sure who's marathon pace he is talking about! No thanks, I tell him.

Well, fast Francis says he doesn't want any of that either; he was thinking hills. So I head out with Francis, the one guy who is a sub-three hour marathon runner. We do 45 minutes of hilly stuff ending with an ascent up Croissan Mountain (maybe that should be Croissan "Mountain" since it is only 665 ft elevation). And then we coast down to finish with a big loop in Minto-Brown - throwing in a couple of 6:55-7:00 minute miles in the flat section and then finished a bit slower for 17.75 miles in 2:14 (7:36). I joked that we did hills and tempo. But most importantly, I just felt GOOD. Running was easy and light and fun. I was floating and gliding and just feeling smooth - a total 180 from two days ago when I was miserable doing three easy miles.

It certainly underscores the importance of rest. I think I sometimes get caught up in what other people are doing instead of just focusing on my own thing and that doesn't serve any good purpose. I keep reading about all these guys doing 100+ mile weeks and thinking I am barely doing enough to get in 70 miles a week. It is good to remind myself that 70 miles a week is pretty extreme for me. I've been running for 20 years and up until 2009 I had never done even a 60 mile week. Despite striving for higher mileage, I think I have learned sometimes the best thing you can do is to not work out at all.
Posted by Pam at 1:22 PM No comments:

Monday I was feeling so good and blabbing about my 162 miles in 16 days. That afternoon I did 8.5 miles with 5 miles tempo (6:33 pace) and was amazed that I felt great at the end of it. Tuesday was 9.5 easy miles, Wednesday was a six mile run with 15 hard minutes in the middle (about 6:40 with slight hills) and then kaploo-ey...the magic was gone. Thursday morning I couldn't run because of an early morning work meeting. So Thursday night I decided to hit the treadmill - every step was a chore and I was running very easy warm-up pace. Instead of a brief pause to kiss my daughter goodnight, I called it a night for a grand total of 3 miles! All day today I have been planning to run, but I haven't actually done it. There's nothing standing in my way, but I just can't get in to it. I figure I deserve a rest after 18 days of running and I think my body is telling me I need it, too! I guess my body is still adjusting to the new high mileage weeks, but I think with a little rest I will be feeling zippy again.
Posted by Pam at 9:10 PM No comments: 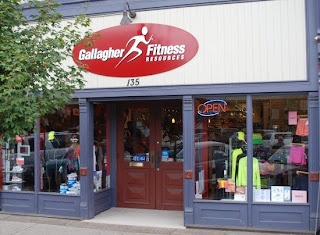 Last Wednesday when I showed up at the local running store for the organized evening workout, the owner was directing people down to the basement. I looked at him quizzically, but he assured me that I was suposed to descend into the store's bowels as well. Waiting beneath were complete outfits (donated by Nike) for running: a bra-top (singlets for the guys), shorts and a rain jacket. The price tags totalled to $200 (though not sure anyone would ever pay that much, especially with the Nike outlet so close!). I have won a few free things before, but mostly I get my running gear the old fashioned way: with my credit card! For a bit it almost felt like being a sponsored elite athlete - it was really quite fun. The bra-top and shorts are quite 'racy' - they certainly make me look like a serious runner. Plus, I think the only matching top and shorts I have ever had were school track uniforms. So I guess now I have to run like a serious runner, if I am going to wear serious runner gear!

If nothing else, I think I have been training fairly seriously: I've put in 162 miles in the last 16 days. My training still suffers from lack of a plan. Mostly, I try to fit my miles in around the social running activities (since that is about all I do socialize - ha!). Tuesday and Thursday mornings we have a die-hard group of four meeting at 5 am for about ten easy miles before work. Saturdays I am doing my long runs with a local running group (including my die-hard buddies). And Wednesday there is the organized group run at the running store. So I am trying to add a bit more "quality" on Mondays and Fridays, with a Monday tempo and a Friday hillworkout, but I am definitely still trying to get it all figured out.

I do find that as I ramp up the miles and workouts, that I am now even a bit evasive with other runners as to what I am doing. People training for marathons often comment how non-runners don't get what they are doing or why they would want to run so far and so they tend not to reveal all of their training plans to the non-runners. But I find I am now doing that even with other runners! Pretty much everyone I run with is a marathon (or less) kind of runner and they are a bit skeptical of going beyond 26.2. And so I sheepishly admit things like running a one mile loop 42 times, doing 70 mile weeks, and killing myself with hills the day before my long run - in fact, mostly I try not to admit to these things at all unless asked! I can't get ostracized from my group or I might miss out on more free stuff!
Posted by Pam at 9:52 AM No comments:

Earlier this month, my friend invited me to get a pedicure with her. I hemmed and hawed for quite a bit. The idea of a pedicure sounded great, but I really didn't want somebody closely inspecting my toenails, for the fact is, I don't even have a full set. Yes, I am a chronic toenail loser. This is to be distinguished from the acute toenail loser, who has toenails floating in their socks by the end of the race. For me, my toenails feel a little swollen at the end of the race and then a couple months later, they fall off. This year, I am wearing a half-size bigger shoes, thinner moisture wicking socks, and a lot more body glide to curtail the problem (I think with some success), but my toenails still bear their brutal badge from last year's CIM. In fact, one had just completely dislodged, leaving me with an empty nail bed (ugly, but not painful).

And so I told my friend I didn't think I'd be able to join her for the spa-pedi. But she didn't let me off so easy: "I am sure they see lots of ugly feet. And I am sure it is better than foot fungus." And so I agreed to go.

The pedicurist had a few baffled looks at my feet and then finally asked me what I wanted him to do with the empty nailbed. "Just paint it. Do whatever you can, but don't worry about it."

The pedicure was a nice luxury and by the end, my feet no longer looked like ultra-runner feet!
Posted by Pam at 9:51 AM No comments:

Getting Cheated at the Champoeg 30K

Today's venture took me to Champoeg State Park, for the annual 30K. These days 30k sounds like a short race to me, but as far as I know, it's the longest you can find this month in Oregon. Plus, I don't want my speedier muscle fibers to atrophy too much with all this long, slow distance running. ;)

I ran this race one other time, back in 2002 in 2:13:30 - so I knew what I was aiming for. I think I was speedier then, but in better shape now. But at the start of the race we were informed that a big tree fell across the course and the course had to be re-routed as best as possible. The RD warned us that with limited bike path options, the new course came up short - probably only 5.9 miles per lap instead of 6.2. The 10k-ers all joked about setting new PR's.

The three laps were pretty steady without much of a race - I was solidly in second place for the whole thing, with a former Olympic marathon trials qualifier easily out in front and the third place woman several minutes back. And with the new course, I really couldn't even race myself and compare to my previous time. I finished in 2:03:30, which even with another mile should have put me ahead of my 2002 time. Based on my splits, I think the 5.9 may have been a little generous (my last "mile" on each lap was more like .8 of my other splits), but two people with GPS's said they got over 18 miles for the course (but not near 18.6 as it should have been) so maybe the mile marker was off just a bit.

By the last four miles the rain was coming down HARD and I was completely soaked through and a lot colder than I wanted to be, so by the end of the race I really didn't care if we were only running 28 or 29K! My original plan was to run one extra loop at an easy pace to get in some extra mileage, but even with a dry shirt and sweat pants I was still freezing and the rain was still coming down pretty hard, so I just called it a day. I basically chugged two cups of soup and chatted for ten minutes and then I was out of there. Fortunately, the awards were just ribbons so I didn't have to feel to bad for missing the ceremony. I got home and took a super hot bath (don't tell me about ice baths!) which finally got me warmed up!

I've got four more weeks before the first "real" race this year, Peterson Ridge Rumble 60k. I am really looking forward to it - I am not sure I like running fast any more!
Posted by Pam at 8:56 PM No comments: