We originally weren't planning to do much for spring break as we thought Megan might be having her tonsils out. But after a fairly illness free winter with NO strep throat, we decided maybe Megan was growing out of this repetitive sore throat thing and surgery wasn't such a good idea after all so we booked a couple days at the coast and a couple days at Mt. Hood. And then I read an article about how awesome the Utah National Parks are in the early spring and then I needed to go there. Ever since we visited Yellowstone and Grand Tetons in the summer of 2014, I've been kind of obsessed with getting my kids to the National Parks. After this past week, we've hit 15 and I've got hopes of hitting another five this summer with the kids and two more without them- not too bad for getting out and seeing this awesome country!

We got in to Vegas late Saturday night and as luck would have it, the Moonlight Ultra 24 hr and 100M race had a six hour little sister that started on Sunday morning (the others started at 6pm Saturday, hence the "moonlight" in the moniker). You are supposed to be sleep deprived when you are in Vegas, right?? So I headed off to Floyd Lamb park right about the time most drunken gamblers were calling it a night. The race was a low key affair on a 1.74M gravel loop through the desert. I was looking for a long run, but didn't want to push too hard with Gorge Waterfalls only two weeks away, so was hoping for at least 40 but not more than 42 miles. The dry desert air was great for my asthma and I felt better than I had in weeks (Oregon pollen is not my friend). I chugged along doing my own thing and by mile 12, I had already lapped every other runner in the race. I got to 40 miles in 5:26 just as it was starting to get pretty warm. If I kept the pace up, I knew I'd go over my plan of 42 miles, so I ended up walking, taking selfies and texting Mac the last lap and made it back to the start/finish in 5:45 where I called it a day - First place overall by three laps (5+ miles) and a new women's course record by almost 7 miles. The people at the race were super nice and it was inspiring watching the 100 milers plugging away especially as the day heated up. 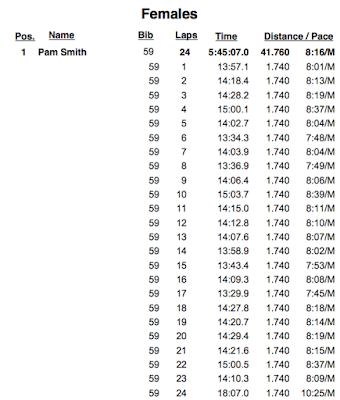 Lap splits. I used the bathroom on lap 4 and 10 (lap 4 was only mile 6. I was so disappointed in my colon! I will attribute it to a bad airport meal and little sleep). Lap 22 I ran part of the way with the men's leader for some company and lap 24, I lolligagged. Otherwise, pretty decent training at 8:16 goal pace.
Posted by Pam at 10:41 PM 3 comments: