2:55:48...If you had told me that ahead of time, I would have happily signed on the dotted line to guarantee it. My previous PR (and last marathon) was at CIM in 2008, when I ran a 3:10:37. (Unofficially, I ran a 3:09:52 marathon split at Autumn Leaves). I trained for a 2:55 and so to be within a minute of that seems like a big success. Indeed, I am very happy to finally be part of the sub-3 hour echelon on runners. Happy, but not satisfied as I had thought I would be.
***
In 2008, I was still a marathon runner and like any marathon runner my main goal was to PR. I missed my goal at Portland, signed up for CIM as a second chance and then spent 2 months obsessing over a couple minutes. When I crossed the line at CIM with a 3 minute PR, I was ready to be done with the marathon for a while and my attention turned to ultras. But after a couple of years running ultras, I came to believe that I could do better at the marathon, that really I was a sub-three hour kind of girl. But beyond just believing it, I realized that I actually wanted to be a sub-3 hour runner, to be able to legitimately say it. Because when I started running utras, I needed a break from the clock's objectivity, but as time passed and I got better at ultras, I realized I wanted a yardstick for my progress. And even in the ultra world, people still ask about your marathon PR.

But it wasn't until three other Salem women committed to running CIM that I cemented my 2011 sub-3 hour marathon attempt. As I have already mentioned, I loved the marathon training, but a big part of it was having wonderful fast women and awesome friends to train with. It also meant that race weekend was girl's weekend! Woohoo! 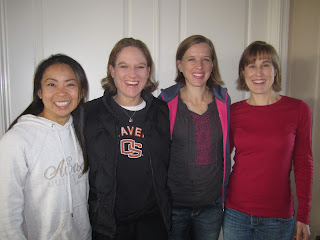 Fast Chicks from Salem, ready to run! - Mariko, Steph, Tonya and me

We flew down Friday and spent the day Saturday at the expo and around downtown Sac, fretting a little bit about the residual strong gusts of winds after all of the severe storms. We even made a trip over to the "elite hospitality suite." Why? Because we could! The four of us were taking great delight in the fact that we had all gotten in to the "elite" field (they finally let me in) even though we are a far cry from elite marathoners. We also did a little shopping for some special running accessories. 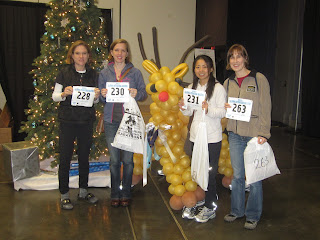 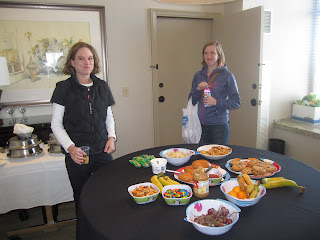 Getting our fill at the elite hospitality suite 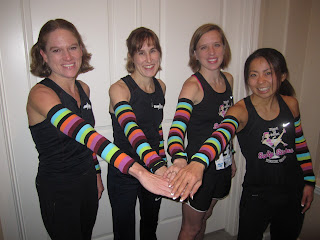 My mom very kindly got up with us a 5 am and drove up to the start. We "oohed" and "aahed" (and maybe did a few other things) at the Great Wall of Port-a-potties. Seriously, I have never seen so many portable johns! Then we headed to the elite tents, where we giggled over the fact that every other woman in the tent was trying to hit the Olympic standard.

The race itself went great for me, until about mile 21. I clicked off smooth 6:35's, feeling great and way ahead of my 2:55 goal. I came through 13 at 1:25:27 - not too far off my 1:25:06 PR. I was still feeling strong and on pace through mile 20 and then the wheels just fell off. My legs didn't feel sore or tired, but I was just drained. My pace fell almost a minute per mile and I struggled mightily for the last 5 miles. With just over two miles to go, Tonya flew by me, looking great. And then in quick succession Todd and Jerry passed me effortlessly as well. I didn't begrudge them their good days, but it made me feel even crappier to see people I knew running so well around me. I averaged 7:15 for my last 10k and had a not so pretty 4:30 time difference between my first and second halves for a finish of 2:55:48. Tonya had a stellar day at 2:53:54. Steph and Mariko were a little duped by the 3 hour pace group, which did NOT pace runners to a sub-3 finish. They finished just a few seconds apart at 3:00:10 and 3:00:24 (pace leader finished around 3:00:20). 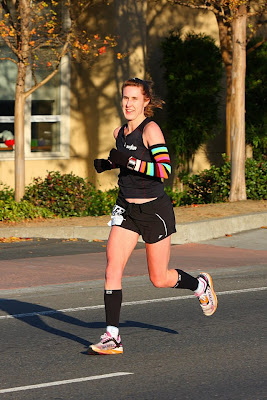 While it is possible that I went out to fast, I don't think that was the case. I think 6:35 is within my capabilities. My best guess is that I had a major "bonk" and I just ran out of fuel. I think coming from an ultra background, I didn't respect the distance enough and I think I didn't account for the increased glucose needs of that fast pace. I remember thinking that I can easily do 3 hour runs without much food and so I ate only two gels during the whole race. It is funny because I usually eat on the high side for calorie intake during an ultra. Losing a few minutes in the marathon itself, doesn't bother me too much, but I feel like I've made several nutrition mistakes lately and as a perfectionist and planner, that pisses me off! I think being "experienced" may be working against me right now, as I don't really get that worried about races any more and as such I haven't been fretting over "minor" details ahead of time. I need to get back to the point of over-analyzing everything and being overly cautious.

After CIM, I was ready to sign up for another marathon immediately, on a quest to shave off another 3-4 minutes. I KNOW I can do it, but with running you can't claim it till you do it! I am considering LA or Napa in March, but I am a little less gung-ho about the whole thing considering the 100k World Championships are in April. So not sure when my next marathon will be just yet, but probably sooner than I expected going into CIM. 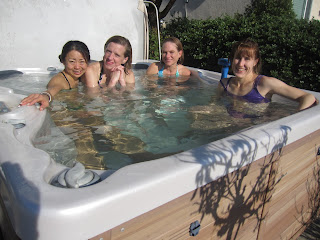