My friend Debbie says discipline is like a muscle: some people are naturally stronger than others but you can work on it to get stronger. But like a muscle, if you overload it, it will fatigue.

After Western States, the physical pain was gone in a couple days. The full body lethargy took a couple of weeks to pass. But what lingered long after that was a lot of fatigue in my discipline.

Perhaps you are thinking of the term "burnout," but I don't think it was burnout in the classic sense of the word, because I was totally pumped up to go running. I just wasn't excited to get up at 4:30 every morning (and go to bed at 8:30 every night on these Pac NW glorious summer nights). I couldn't get excited about setting out three sets of clothes every night or cooking my week's food for three hours every Sunday night. And on my day off work, I just wanted a day off, not a day to squeeze in a run, a lifting session and a yoga class. I think I could have gotten psyched up if I had a race on the horizon, but I felt like the IAU and the local organizing committee was jerking us around so much about the 100K Worlds, that I couldn't get my head into training until we knew it was a definite go. And then Worlds got cancelled and I still didn't have an impetus to shift back into high gear. In the six weeks after Western States, I only did speed work twice, I never went to the gym, I did yoga only once, and I did not do a single air squat! But I had loads of fun running!

In July, Mac and I paced Dennis at TRT during his 6th place finish.

Then I spent a weekend in Sunriver with a bunch of Salem women for a weekend of running and bachelorette celebration for my running partner Stephanie's upcoming wedding. We had a nice long run around Sunriver on Saturday morning. And then Sunday morning, a few dedicated partiers got up for a run to Benham
Falls. Speaking of falls, guess who completely wiped out on the smoothest, most non-technical piece of trail? Yeah, me, the trail runner! All of the road runners I was with though that was pretty funny.

Next it was down to California to pace Tia at AC for 48 miles. I was kind of bummed in the morning when the four Oregon runners were getting ready, because I was wishing I could be racing, too. But I got to have a great day sharing Tia's awesome run. During WS when I was doing so well, Dennis told me he'd take a bear for me to keep me in the lead. When I told Tia that she was doing so well that I guess I'd have to take a bear for her, too, she just joked back, "Don't worry, Ardilla (her nickname for me), if there's a bear, I know I am totally on my own!" The funny thing is there was a bear on the trail at mile 84 that the Idle Hour aid station warned us about. Fortunately, a group of volunteers were successful in scaring it off ahead of us so I didn't have to prove what a chicken I am be a hero.

The only other crazy incident came at mile 96 when we got to Millard and a volunteer asks if we know the course because it had been vandalized and flags removed. When we told him no, he frantically got ready to run with us with marking ribbon in hand. Being an older gentleman, he wasn't particularly speedy, but he was fresh and could run ahead of Tia, except he kept stopping to tie ribbons. I knew Tia was anxious to get to the finish, so I ended up taking the ribbon and marking the last three miles of trail. Most of the course had some residual markings but two critical turns had no markings at all. I doubt many people have paced and marked the course at the same time. But I think disaster was averted!

Tia came in 6th place overall, 2nd female, first master, and 9th best female time ever! She won a cougar for her effort, so now we are practically twins!! I am excited to go back next year and avenge my only ultra DNF.

Then a week with my extended family back in Sunriver, where we got to finally meet Cousin Tessa (my niece). My brother decided to enter his first ever running race by doing the Haulin' Aspen trail half marathon. Yeah, distance crazy runs in the family! Mac and I joined the fun by running the full marathon and I even managed to win! But, Oh my god, it was so ugly at the end! My hamstrings were seizing up and I was dying!! Hundred mile running might leave the hamstrings a wee bit deficient!

This past weekend, I finally got the opportunity to do the Mt. St. Helens circumnavigation on the Loowit trail. And I had a front row seat for Mac's first "ultra-barf." He didn't think it was as awesome as I made it out to be at Western States. But he agreed the whole trail was pretty awesome. Though, he's a little more freaked out about the Volcanic 50k in three weeks on the same course. 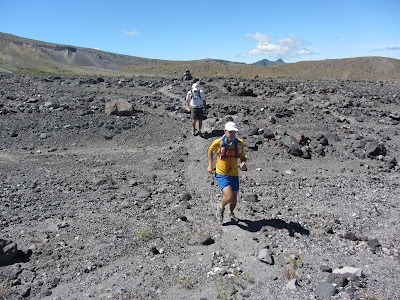 And this weekend, I have another summer "play date": 47 miles of pacing with Amy Rusiecki at Cascade Crest!

But all this play has revived my discipline and I am ready to jump back into training. Yesterday I fired up the quads with 100 air squats and I even cooked vegetables for two hours last night! My next major Big Goal was supposed to be Desert Solstice in December, but now it looks like the 100km World Championships are back on in Dubai on December 20th. But I've got one last little mountain "fun run" in the works before switching back to road running gear...