I am up in Canada getting ready to run my second race since worlds, so I guess it is about time I write something aboot Worlds, eh? (I am practicing my Canadian).

I have been completely unmotivated to blog about Worlds. A lot of it has to do with the pace of life: kids back to school, me back to work and training, and my garden in the season of full bounty. Two weeks in the Netherlands put me way behind in harvesting and canning so I have been spending a lot of my free time putting up tomatoes, soup, sauce, pears and juicing watermelons (for popsicles, and my personal favorite...margaritas). But some of my reluctance comes from difficulty in presenting the two sides of this event. This was an overwhelmingly positive experience and I can not put into words how amazing it was to be part of the US team competing in a race with support and spectators that made it feel more like the Boston marathon than an ultra. 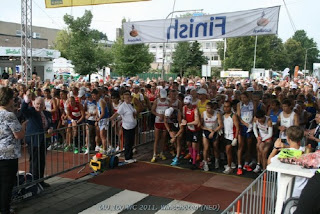 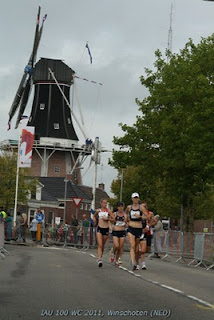 Spectators out for a party with yard decorations. 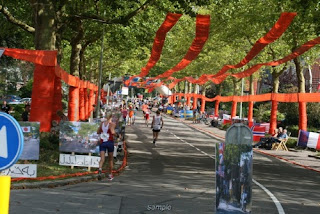 Awesome street decorations. The flag of every participating nation was on the right and race photos with "Welcome" in every language on the left. 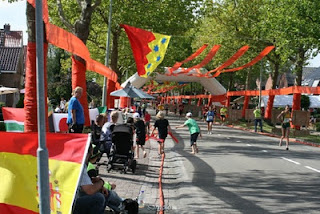 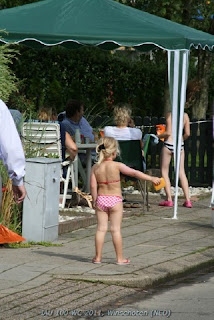 Lots of kids handing out sponges. I must have taken a hundred of these in the last 50k.

But my race was tainted with disappointment. I went to Winschoten with three great 100k's under my belt this year: A second place at Bandera 50 minutes faster that 2010; a solid 7:53 at Mad City; and then a win at Miwok. My training after Western States was strong and I felt like 7:45 was well within my capacity. But at the end of the day, I only had a 8:16 to show for my efforts.

The days leading up to the race were very low key as there was little to do in the athletes village. I went on a couple of easy runs, including a preview of the course, and made sure I got plenty of rest. We had a couple of team meetings.

Friday, I got all of my bottles set up. Even at Mad City, I ran with a hand held and some food so I could make fueling decisions on the fly. Basically, I run with only very loose guidelines for fueling: aim for a bottle an hour and at least 200 calories, but I pretty much eat what and when I feel like it. Having to come up with a more concrete plan and then set it all up ahead of time was very new to me and something I should have put a bit more thought into.

Race day was overcast, and I asked the team manager Lin if she thought it'd be a good idea to start with sleeves. "Ugg, no," she replied, "it is so muggy, you'll sweat just walking to the starting line!" Humidity was over 70% for race day and when the clouds burned off after the first couple of laps the course was entirely sun exposed with temps in the high 70's.

One of the highlights of the race was running with Annette. I caught her in the second lap and ran about two laps with her. The running was so smooth an easy and we were chatting up a storm and talking a lot about our spouses like love struck teenagers. The course was also amazing. Well not the route, per se, but the elaborate decorations, the crowds, the windmills, and all the families with their own aid stations and sponge buckets. And I loved that we had our names on our bibs. Partly, it was cool too have the fans yelling our names (as Annette said to me, "you are lucky to have an easy name because everybody wants to cheer for you."). But also it was amazing to run by people and see such a mix of names: Yuko, Sabine, Oxana, Bjorn, Kostyantyn, Jose, Alexi...it really cemented the international vibe of this event for me. 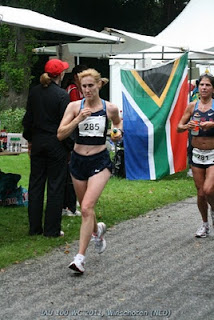 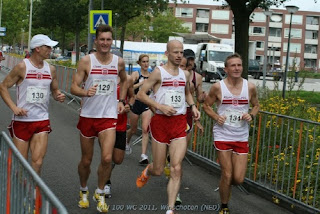 Running with the Polish team (me-back center). We weren't supposed to run with the men but I was with these guys for about 3/4 of a lap because I couldn't get around them. They finally sped up and dropped me. 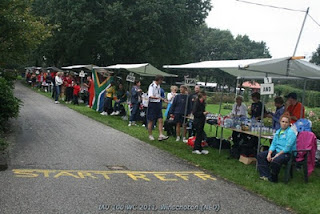 The Aid Station row. Our booth said had signs for "AND" and "USA." My first lap I came through and though "And USA what??" Then I remembered we were sharing a table with Andorra!!

To me the biggest disappointment was not so much the bad race, but the sense I have that I was the cause of my own problems... basically, that I messed up. I think I am usually good at strategizing and fueling. I know my typical fueling seems "loosey goosey" but I am good at assessing what I need at a certain moment and taking care of it. In this race, I had everything laid out ahead of time and for some reason, I treated it like it was set in stone. I hadn't planned for that much heat and humidity and I didn't adjust soon enough. Additionally, I didn't think out the timing very well. Normally, I would aim to eat every 30(+) minutes, but I was coming through the aid stations 21-22 minutes apart, so I not only under-consumed salt and fluid but I over consumed calories.

Another thing that is hard to swallow is that I didn't score for the team. I had the third fastest qualifier on the team and it really feels like I didn't come through for them. Plus, being a non-scorer is like I didn't even count. It's kind of like being the back up goalie in World Cup soccer (only the back up goalie gets no playing time and I got MORE "playing time" than my scoring teammates - ha!). The write-ups are hard to read because they really make me feel like I didn't do anything worthy out there. My consolation is that my time could replace ANY of our three scorers and we still would have gotten the silver medal, a testament to the strength of our team. And I do feel like I helped Annette, not only by keeping her company, but also by pulling back on the pace several times to make sure we stayed at a sensible clip.

I am trying to keep this in perspective, as I know there is still a lot of positive here. When the going got tough, I definitely kept my wits and will together and rallied at the end. The women's field saw massive carnage as many others succumbed to the heat and humidity as well, with only 42% of the women finishing the race. One hundred and seventeen of the world's top women came together to run and at the end of the day, I was 16th. Sixteenth in the world and a team silver medal can't be so bad! Hey, Max King finished 16th at his first World Mountain Running Championships, so I am in good company!

As I stated in the beginning this was an overwhelmingly positive experience, something that I am so honored I got to be a part of and I don't want to get too caught up in the negative. But I made some mistakes and didn't have the race I wanted. But live and learn. I think I am much better prepared now that I know what to expect and I am hungry to prove what I can do in Italy next April.

I'll have something better to say, but the Max King I know is a magician/comedian. I'm laughing at thinking of him mountain running.

I am sorry I am leaving a comment, I can't find your email. I am writing you in the hopes that you want to participate in an e-book we are writing about ultra runners.

We want to tap into the collective craziness (we mean that as a compliment:-)) of this community to challenge and inspire other people to make their own life an ever-greater creative expression of their own goals and dreams… without limits.

We would ask you to answer two questions about your experience with ultra running.

If you'd like to participate please shoot me an email at dreamit@juliossol.com.

All the best,
Jannick

Steve- Max King is a Bend, OR star running for Montrail who started as a steeple chaser but is now running trails and marathons (will be at the OT this year). In the last month alone he won the World Mountain Championships (after his 16th last year!), the 50K national trail championships and the x-terra nat'l championships (the latter two on back to back days). He definitely has some magic; I am not sure how funny he is.