“Muscle memory,” Traci told me a day before the race in response to some of my pre-race anxiety. “Once you get going your body will do fine running at that pace.” I hoped she was right as I really had done very little training specific to 100km pace. Late withdrawals by Sarah Bard and Camille Herron meant the US Team was down to three ladies - the minimum needed for a team score - so the pressure was on to deliver. My less than ideal training and the uncertainty of asthma had me concerned.

“Muscle memory,” I repeated to myself in the first dark miles along the beach. My plan was to be conservative at the beginning, knowing there was no room for error (and also, because that is always my plan). While I was definitely in the back half, I was already in the low 7:40s for the first three miles. “Slow your roll,” I thought, but still I drifted down into the 7:30s and the pace felt comfortable. Maybe the muscle memory was kicking in after all.
Training
I spent the first half of this year training for the Dawn to Dusk to Dawn 24 hour race and 100 mile attempt and all summer training for Spartathlon, which was only 8 weeks prior. While I did keep some speed work in the schedule for those two events, there was basically nothing at 100 km pace (7:30-7:40) as that is much slower than the speed work and much, much faster than all the long slow runs for D3 and Spartathlon.  My average mileage for the 8 weeks after Spartathlon was around 50 mpw, with only two runs over 20 miles (21 and 22). But I wasn’t worried about endurance. My focus was on speed, mobility and strength and I felt I did a good job doing a lot of extras beyond just the miles in the running log. I was a regular at yoga (1-2x/week) and I was killing it with the strength training (in terms of attendance, not actual pounds lifted!). In fact, I even competed in a 5 workout CrossFit competition during that time, placing 37th out of 274 ladies in the scaled female masters category (aka “handicapped old ladies”). I felt like I did the best I could with the short time frame (with recovery and taper, it was really only 4 weeks), but it was far from my ideal build up.

The Team
Besides myself, the other two US ladies were Meghan Arbogast and Traci Falbo, two of the best and most consistent ultra-runners in the country - a very good thing when the team doesn’t have any “insurance” for bad days. What I particularly loved about our team is that we were all masters athletes with an average team age of 47.5 years! While I made a couple “old lady” jokes on social media, the truth is, I was pretty excited about this fact. I love that we are defying age not with silicone and botox, but by representing our country on the world stage!
The Course
The course was a 10k “loop” repeated ten times. The loop started in front of our hotel, ran 1km through town and then turned onto a beachside promenade with a surface composed entirely of 2 inch tiles. Right before the 4k mark, the course turned off the beach and took a very convoluted route through mostly residential streets with several out and backs. The course looked pancake flat on paper but the out and backs had a very slight incline (1% or less) on the way out and the same slight decline on the way back. While it doesn’t seem like much, it was perceptible on the run and more so as the day went on, making the out and backs even more of a pain. I really liked running by the beach with it’s fairly straight course, nice scenery and lots of people out for strolls. The out and backs got a bit tedious but I did enjoy being able to watch the race ahead of me unfold not to mention being able to keep tabs on the runners behind.
The Weather
We started in the dark at 7 am with temps in the low 50s. The temperature gradually warmed for the first four hours and then we were hit with rain for an hour or so. The rain itself was not bothersome, but several lake-like puddles formed and persisted the rest of the day and in some places the tiles were a bit slick. The dip off of the boardwalk required 3-4 steps through ankle deep water.

The Race
187 runners from 37 countries lined up for the World Championships. The headline for the men’s race was the presence of the South African team - on paper a team that should’ve decimated everyone else. Indeed, two of their runners were out quick and their final three were just behind with only Jonas Buud and Hideaki Yamauchi hanging close. The first South African lapped by me at just 36k (46k for him). I know the guys are going to lap me at this race, but, holy cow - I was barely a third of the way in! I was going to have to watch out for being triple lapped at that pace! 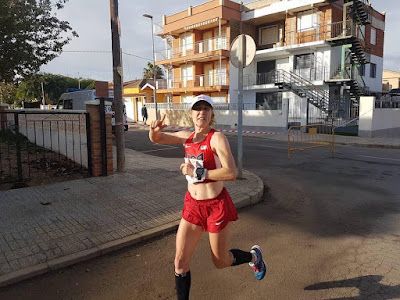 But mile after mile, I stayed consistent while the South Africans faded a bit and I am happy to say that none of them managed to even double loop me, though men’s champion Hideaki Yamauchi of Japan lapped me for the second time with less than 100m to go on my lap 8. That meant I got to see him finish and I could pretend the crowds were cheering for me! Of course, I hated him for being done while I still had twelve and a half miles to go. And at that point, I was feeling the pain - the stiffness and the twinges in the legs with every step that let me know I was going to be dealing with some very sore legs when this was all over. But my bigger problem at that point was a very urgent need for a bathroom stop and the nearest port-a-johns were three miles away! Those were my slowest and most uncomfortable miles of the day as there was absolutely no discreet place to duck off the course. But with business finally attended to, I was ready to get those last 15k done!
I had been closing on Meghan, who had been leading for Team USA all day, for a couple laps but the gap once again opened after my pit stop. Still I had her ahead to focus on and her presence helped keep me moving. As I hit the 10k aid station for the final time, our Team doctor Lion told me Meghan was “exactly 47 seconds ahead” so I put in a little surge hoping to catch her so I could have someone to run with for a bit as I hadn’t really been with anyone all day. I finally caught her on the boardwalk and got to run a few minutes with her. Even that small amount was enough to lift my spirits and I could tell we would both finish strong. But I had just a step more in me at that point and Meghan encouraged me to go ahead since time matters (scoring is based on aggregate team time, not places like X-C). From that point on, it was just counting down the kilometers and being thankful that this was the last time I had to pass every little landmark on the course. 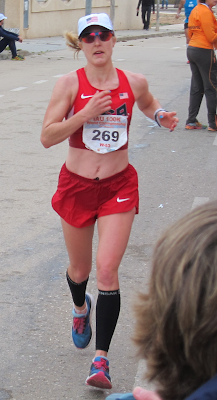 I ended up finishing 12th place in 7:56:48 for my 5th sub-8 100km. While I was a bit off of my 7:43 PR, I feel like I ran a smart and well paced race and it went as well as I could have hoped for given the circumstances coming into the race. Meghan finished right behind me in 13th for a huge 55-59 age group world record and Traci posted a 17 minute PR and stayed really tough all day to finish a strong 16th. The solid efforts by all three runners put us on the podium for a bronze medal! Additionally, this event was the World Masters 100km Championship, and I was second master overall for silver in my age group and Meghan and Traci were both “golden oldies” taking home top honors in their categories. The men’s team also finished third overall and Patrick Reagan had a remarkable last lap to pick up an individual bronze medal. The men’s team was composed entirely of youngsters so no masters medals for them! (Getting old does have some advantages!). All in all, it was a great day for the US Teams. The South African men's team did end up winning, but only by 5 minutes over Japan and Japan took home top individual honors with only one South African on the podium.
Besides a great day on the course for the team, I had more fun with the team this year than any other year, in part because the team was small and most of us traveled without crew and in part due to some spunky characters on the guys team. Sunday night after the race, we had a great time celebrating with the Finnish team and a few Norwegians at a wine bar into the wee hours of the night (hey, when you are old like me, 1:00 am counts as wee hours!). On Monday, Traci, Zach Bitter and I traveled Alicante for a little touring and a nice meal with Patrick and his support crew to wrap up the time in Spain.

I qualified for the team this year essentially “by accident” as it was a split in my 100 mile attempt at D3 and I wasn’t planning on going. Fortunately, Meghan made a convincing plea and I decided to go. Meghan is so wise! I am so glad to be there so that we could have a full team and the time in Spain was a great experience. Team USA needs more ladies and USATF just approved more funds to support the ultra World Championships, which will hopefully cover the majority of the costs in the future. Worlds are now going to an every other year cycle, so there is plenty of time to get ready for the 2018 event (location TBD) - if you are a speedy lady, please consider trying to qualify for the team.
A big thanks goes out to my husband Mac, who not only supports me but also watched our kids while I was gone AND spent Thanksgiving with my sister and her kids! - Heaps of husband super bonus points to him! Thanks to all the wonderful members of Team USA for making this such a great event and especially Timo, Lin ,and Lion for their leadership. Running for Team USA was especially great this year and I am even more excited now to be donning the national kit again next year for the 24 hour World Championships.

Congrats, Pam! Sounds like you were really smart both with your training and during the race itself. I love that the wily all-masters team was able to place 3rd!

Great post Pam! I love your down to earth style. Congratulations to you and the team!! I hope to see you again at a race soon. I really enjoyed watching you perform at D3.