I am super lucky to be training for CIM with three other awesome women from Salem. In fact, that is one of the main reasons I decided now was the time to do a marathon - because of readily available training partners. We have more or less been doing Pfitzinger's training plan at the 70 miles per week setting. I really love the long run component to the plan, though I can't say I have really read much on the reasoning behind the plan. But Steph said she wanted to try it and we were all game. It's been great with lots of marathon pace running. But last Sunday (11/20) we decided to skip the long run a do a 10k. I am not sure if this was supposed to serve as a "tune-up" or a reality check!

We headed down to the EWEB Run to Stay Warm in Eugene where the 10k makes a big loop around Alton Baker park (which I accidentally called Alton Brown park at one point, but alas, no foodie commentary at this 10k). Basically, you run a mile upstream, cross a pedestrian bridge, run three miles down stream, cross another bridge, and run back up the river to the start - very scenic and all on bike path, made even better because there was no rain!

Tonya, Mariko and I all started together in our matching Salty Sistas singlets. Salty Sistas is the Salem Hood to Coast team. I have never actually been on the team, but Mariko said I could wear her hot pink singlet. I joked that I was the illegitimate salty half sista! Please note that I did NOT plan to wear hot pink with red gloves! 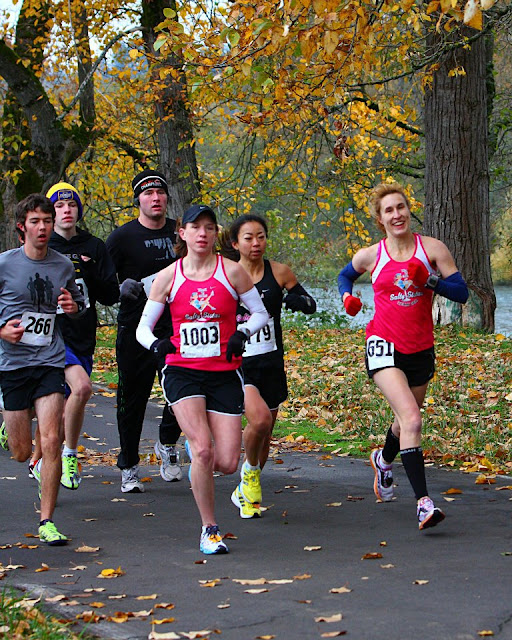 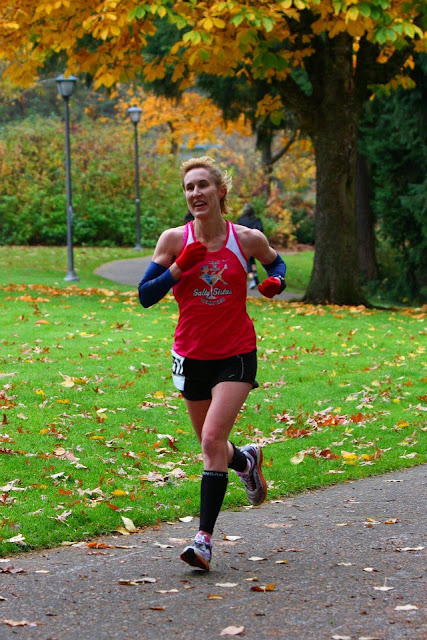 My friends Gordon Cully and Michael Libowitz from LongRun Picture Company were out snapping photos on the day...it almost felt like I had the paparazzi following me around! 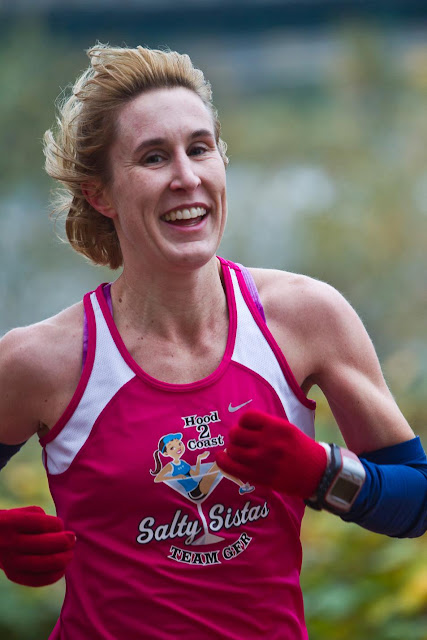 Michael got this shot and despite the Rainbow Brite outfit, this is probably the best running photo of me ever! Plus, it makes me think the push-ups may be paying off (although, note that I still do not have big enough biceps to keep extra small sleeves from falling down!).

The Salty Sistas stormed through Track Town, going 1-2-4-5. We have an 8 year age span so we cleaned up in age group wins (including master's overall)! 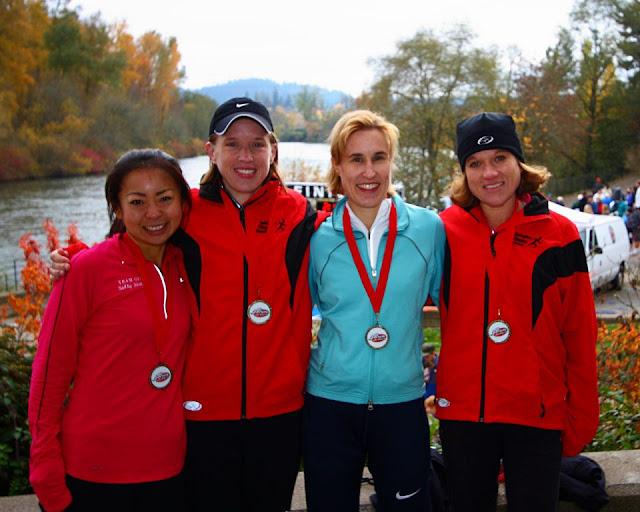 The Salty Sistas (and illegitimate salty half sista!)

We won these nice hoodies, except they say "WINNER" on the back. If your sweatshirt says "winner", doesn't that make you a loser?? I wore mine to the gym all week (yes, I am a loser) and got several comments about that back, which I think confirms my loser theory. 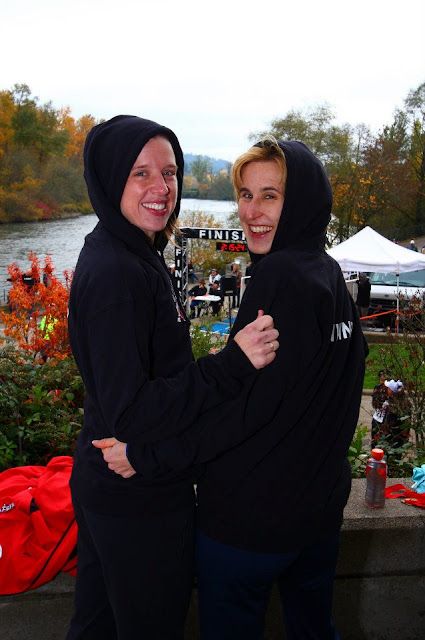 If this was our reality check, I have to conclude I am ready. In two weeks, the four of us head down to Sacramento. And I found out this week, that I'll be joining my friends in the elite field. I guess a few spots opened up, so I got in!!

Thanksgiving Day, I was off to the races again. This time the Turkey Stuffer 5k...but that's tomorrow's story.
Posted by Pam at 5:22 PM

May be I should add push ups too...