Thursday, it was off to the races again for the Thanksgiving morning Turkey Stuffer in Springfield. I was coming off a big PR four days earlier at the 10k, but that paled in comparison to this 5k race, which was one of my best running experiences ever!

I finished the race in 41 minutes and 54 second and I could not be prouder! My six year old daughter Megan completed her first 5k and it was awesome to support her as a family in this awesome accomplishment.

Since I had raced Sunday, our plan was for Mac to "race" the 5k, while I ran along with Megan and pushed Liam in a borrowed baby jogger. Since I was running for fun, I thought I'd wear a pair of cutesy Christmas socks, but when I got them out Megan started fawning over them and begging to wear them for the race. OMG, could this get any better?!? She wants to run and dress up! She is SO my daughter!

We got out of the house a wee bit later than planned for the 75 minute drive to Springfield. I think we had a conversation 50 miles into our drive that went like this:

But we made it with about 13 minutes to spare. I sent Mac to get our numbers and told him I'd meet him at the start with the kids and stroller. I made it to the start in plenty of time but then just stood around waiting for Mac. Megan (who is a bit OCD) kept asking where was Daddy and Liam was trying to run over other runners with the baby stroller. Finally, the race started, but no Mac. Whatever. I figured he was up front and just didn't have time to find us. 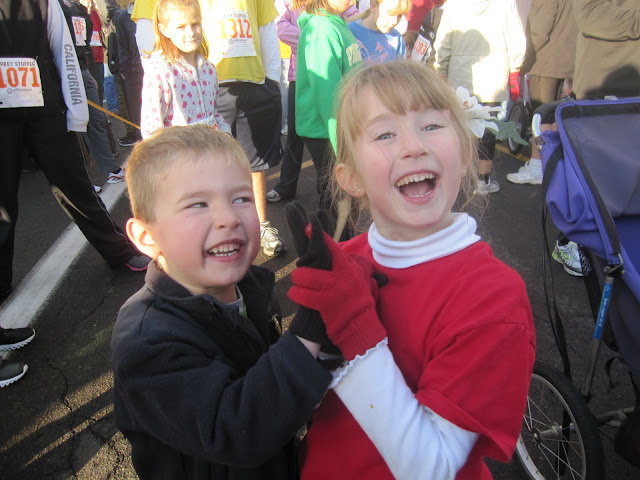 Are you sensing the pre-race jitters??

Holy back of the pack congestion! Megan was pretty frustrated at first as she just wanted to run. She was weaving in and out of people, which was tough for me because I had to maneuver with a gargantuan jog stroller! But finally it thinned out and Liam even got out to run. That kid runs just like he thinks - all over the place! He kept getting in and out of the stroller depending on his energy level.

About five minutes in, Mac jogs up to us with a fistful of numbers and timing chips, "Hi, fam!" It turns out a few too many people tried to do last minute check in on Thanksgiving - oops! But it was a happy mistake, because then Mac decided to run with us, too. I pinned on our numbers and threw the chips in the baby stroller pocket.

Megan still needs to work on pacing. She doesn't do slow! Sprint-walk-sprint-walk-sprint, but we seemed to be making pretty good time. Liam got out of the stroller with 3/4 of a mile to go and ran to the finish, too, so he probably did about half the run on his own. My two kids are SO different. Megan had really wanted to wear my Garmin (another OCD runner in the making, I tell you) and she kept looking at the watch and giving us odd splits: "We're at one fifteen" (1.15 miles). When she'd try to catch up with somebody (Liam, a lady with a dog) she was so focused. Liam has no focus. He was trying to follow all the cracks in the road. When the cracks zigged, so did he. "Mom, we have to run on these cracks so aliens won't get us!" Ummm, whatever, dude, just keep running! 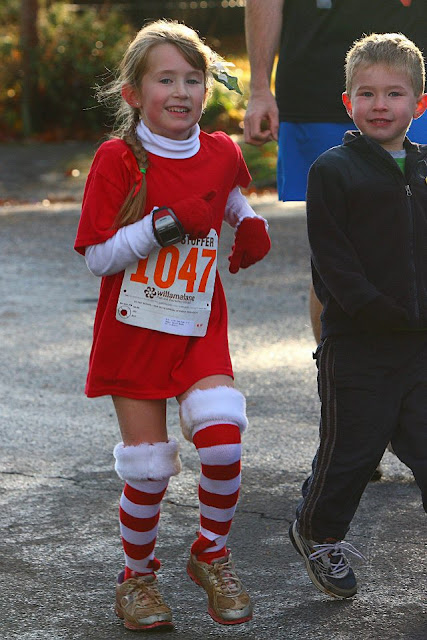 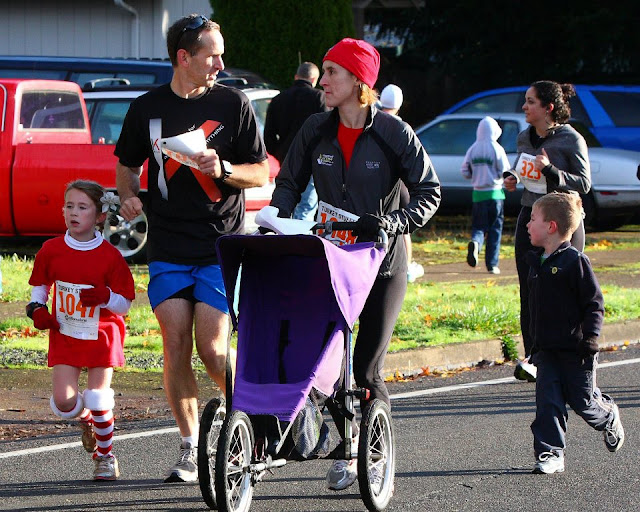 I love this photo. Megan is totally on task. I look like I have just said something very grave to Mac: "Yep, your  whole town has been stricken by the plague." Mac has a complete look of shock on his on his face: "The plague? What?! Nobody gets the plague anymore!" And Liam is like, "Hey, is that a piece of garbage in the gutter?" Also, did you notice there is SUN!?! (That makes the plague a little more tolerable). 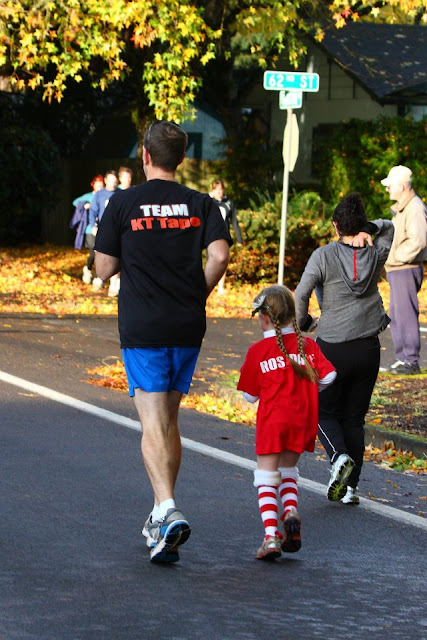 Unfortunately, when we crossed the line our chips were still in the stroller pocket and didn't register on the timing mat, so don't look for us in the official results.

The race had free admission to the local water park after the race, which was the reason we chose this race over all the other Turkey Trots in our area. This was great fun for the kids. Even Mac and I took a few runs down the slide! 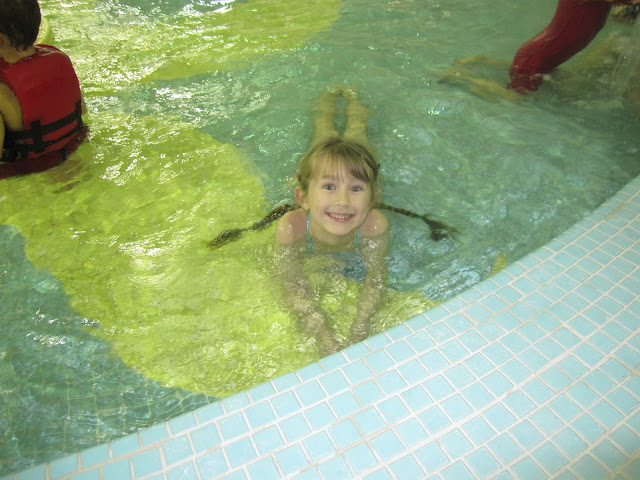 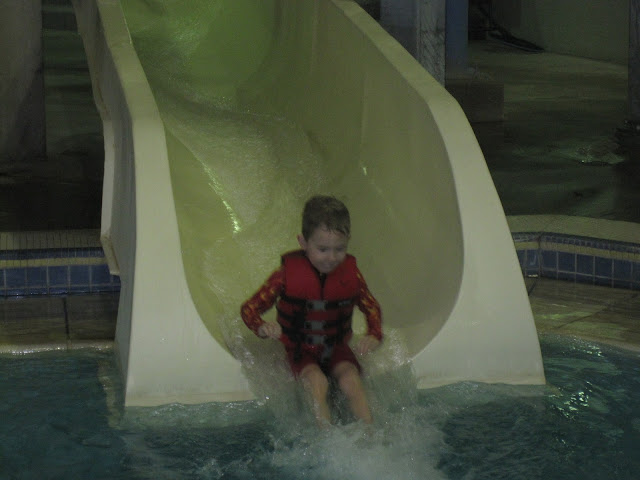 After a couple of hours of splashing we headed back to Salem for a quiet Thanksgiving dinner at home. I am very thankful for our happy, healthy family. I am looking forward to many more Turkey Stuffers together. 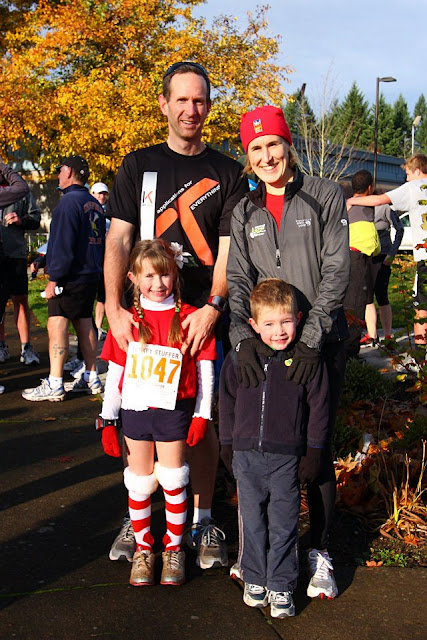 Nice family run. I love those. I might have Alex talked into pacing me at Umstead for a lap. Love the Santa socks!

Even I haven't had the plague, and I got written up in Mortality and Morbidity Weekly Reports twice!(one year, I was the only case of Newcastle's; lesson: don't try contact lenses for the first time when growing viruses in the lab)

Pam! This is the most rockin' blog post I have read all year! Iam sooo happy that you all as a family had such a cool and (healthy)adventure!