Chuckanut was not in my original plans for 2012 , but I decided to add it in for many reasons:

1) Training is boring! Well, that's not true but 30 milers are a bit of a challenge. Like two weeks ago, when I started running at 5 am (on Saturday!), got in 14 miles and then met the fast Salem marathoners (who were fresh) and got totally worked doing their hilly run. Much better to go race! And Chuckanut has enough flat miles to count as "speed work" for the 100k.

2) It's a chance to race Ellie. Ok, I don't mean that in an arrogant way, like I was planning to take Ellie down. But Ellie is the 2011 Ultrarunner of the Year; she is the best in our sport. If you want to know where you stand you have to go up against the best and use them as your barometer. (Sad conclusion: I stand WAY, WAY, WAY below Ellie, but still, good to know).

3) I didn't have to hear about Star Wars for an entire 36 hours! Ladies - if your husband comes up to you and says, "Is it ok if I watch Star Wars with our 5 year old son? I think he would love it." You should immediately and vehemently object. You know how your son has become the most important man in your life? (No, no, Honey, I don't mean for me; I meant for the other Moms). Anyway, that will be completely ruined as soon as your son sees Star Wars, such that you will no longer be able to have a normal conversation with your son because all he will want to talk about is that stupid movie - check that - six stupid movies! And he will pester you with questions like: "Who taught Yoda how to be a Jedi?" or "How come Luke Skywalker isn't a Prince if his sister is a princess?" or "Does the Death Star have other weapons besides the laser?" And even though you don't know the answer to any of these questions, it won't deter him from asking you a thousand more, until you, too, will be looking for excuses like a 50k race to go spend a night in a cheap hotel by yourself.

4) Chuckanut is a La Sportiva sponsored race. I suppose I should mention that I am running for La Sportiva this year. The very day I made an e-mail joke that I wasn't tied to any sponsors, I found out La Sportiva was interested in putting me on the team because I ran a lot of big races last year (like Western States and Miwok) in La Sportiva shoes. It was an easy decision because I love the La Sportiva shoes. Besides, I don't think anybody else wanted me! There was no pressure to do any La Sportiva races, but it is certainly encouraged and I got free entry. (Shameless product plug: I wore La Sportiva Wildcats)

6) I have a race addiction.

So there I was Saturday morning standing in the starting chute, rain pouring down, and fretting that I seemed to be the only person not wearing a jacket. Soon we were off to take on the Chuckanut 50k, which is a bit of a mixed bag when it comes to trail running: 6.7 miles of (mostly) flat gravel to start, a big climb and descent on some nice single track, a long grind up a logging road, some gnarly technical ridge running, a steep grunt up "Little Chinscraper" at mile 20, 3 miles of pounding downhill, and then another 6.5 miles back on the (not quite as flat as before!) flat gravel path.

I started in the lead female pack at a good clip (6:50's), got dropped on the first little hill, but felt pretty good most of the day. I pretty much ran all of the first two climbs and felt good about my efforts there. But on the ridge trail I was just hemorrhaging time! The running was both fun and frustrating at the same time. Roots, rocks, mud, snow, and lots of twists and turns kept me from getting into any kind of rhythm. And I know it was just me because I got passed by seven guys here. They would dart by me and then just walk the hills! Arrg - I knew I was in better shape and faster but I just cannot run this stuff (it does not help that I am doing all road training for worlds right now). I passed them all back on the subsequent smooth trail, but for someone with technical ability and speed (aka Ellie), I was just giving away time. I was in 4th and told I was 10 minutes behind third at the next AS! Little Chin scraper wasn't so bad - I could run about half of it, albeit a pathetic mini-step jog, but I passed two guys. On the final downhill and flat gravel, I passed five more guys, but still ended up 46th place overall/4th female (4:37), just over two minutes behind Joelle Vaught in 3rd and 4 minutes behind track speedster Jodee Adams-Moore in second. Then there was Ellie, 22 minutes ahead of second with a new CR, which ruined my illusion that course conditions made for a slow day!
Afterwards, I was chatting with Dave Mackey and we were joking about 100k's being more our style and he says, "Yeah, but you were first master!" Very smooth, Dave, but I AM ONLY 37!!!...I just look old. 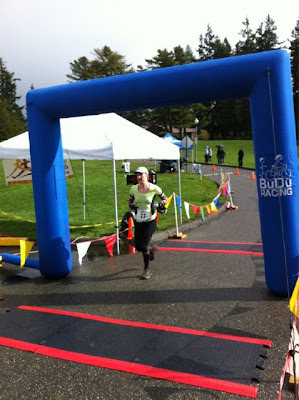 Sun at the finish! And are my eyes still closed?? How is that possible? No wonder I look old!
(photo: Bryon Powell)

All in all, Chuckanut was a fun race and a good effort five weeks out from worlds. Thanks to Krissy, Ellen and all the volunteers for a great event.

I've got a few easy recovery runs the next couple days, maybe a jog to Wal-greens to pick up some anti-wrinkle cream, and then one last big training push before we leave for Italy! This year is flying by fast!

Another funny read. First, I have 16 year son who grew up on SW with dad. I even had to dress up like Princess Leah once and....we have a room full of SW crap including a life sized cut out of Darth Vador. I know who to give that to now. :)

Second, I am 45 so if you want help with wrinkles your going to have to better than walgreens, maybe upgrade to Target.

Congrats on your run and good luck in Italy!

Yeah, I had lunch with 2 girlfriends discussing stupid Star Wars! And they were pissed that I told them I am not even considering to watch it just to know what the heck it is! My 16 yo owns all movies on VHS and DVD!
Pam, great read, indeed. Get expensive stuff from internet, I got a sample from some plastic surgeon office and stretch it now (although my son says I look like a normal 42 year old, not any younger).
Awesome run, Miss Race Addict!

Great report Pam. For my part, of course I know you are 37 and I meant to say," 1st Jedi Master".. sorry about that critical adjective missing. Congrats on La Sportiva!

Pam, I would rather have your aging tips then your anti-aging tips! Your beautiful and awesome! Powerful sayings that keep you young forever: Chuckanut chuckanu chuckanut!