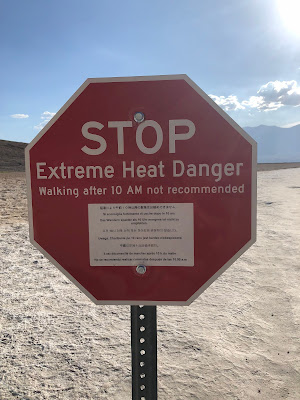 When I my enthusiasm for ultras first started, there were two things I swore I would never do: eat a plain potato dipped in salt and run Badwater. Those things just sounded highly unpleasant. I made it all the way to my second ultra before I was chowing sodium crusted tubers mid-race. Well, ok, salty potatoes aren’t really that crazy (and can actually be delicious), but Badwater...That was still a very hard NO. Only a fucking idiot would run 135 miles through DEATH Valley in July, and I am not a fucking idiot. Or at least I wasn’t for 16 years of ultra-running. But here’s the thing, ultra-runners tell you they do these races to push boundaries, to test their limits and to get out of their comfort zones, but how many of them really mean it?? Within our ranks we see so many runners gravitate toward the same kind of races; they find a preferred distance, a preferred surface, even a preferred race that they go back to over and over. I still have plenty I can improve on at 100 miles and they still challenge me tremendously, but honestly, they don’t scare me anymore; it’s a mythical beast I have already slayed. I’ve had a few battle wounds along the way, but there’s been enough success to make me feel like I know what I am doing. And so in the last couple years I’ve found ways to find new challenges - running a 100 miles at my fastest, the 153 mile Spartathlon, 24 hour racing- and gradually I came around to the idea that I needed to run Badwater, too. It’s iconic, steeped in history, and rightly deserving of the title, “World’s Toughest Foot Race.” Also, it scared the crap out of me! But on paper it should be right in my wheelhouse: net uphill, >100 miles, runnable climbs, and a lot of heat. How could I not sign up?? :D 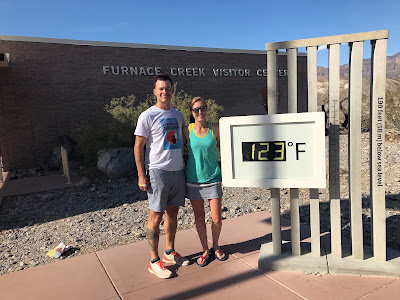 Check in with Crew Chief Jimmy at a mild 123 degrees

Western States four weeks ago was supposed to be my confidence builder, but it was the exact opposite. Due to a spring hamstring injury, training hadn’t gone the way I hoped and on race day I puked relentlessly for 20 miles. And then we got to Death Valley and it was 123 degrees!! Oh yeah, and it was going to be hotter on race day! I spent the two days before the race telling myself I was definitely a fucking idiot for getting myself into this! Fortunately, I had four super amazing people with me to keep me calm and tell me that it was going to be fine. We even had a little fun in the park on race day to keep things light. 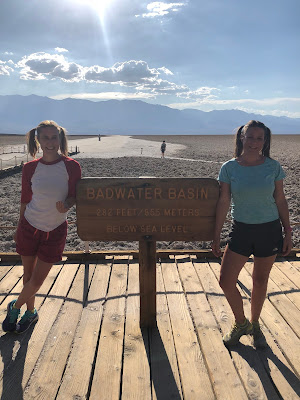 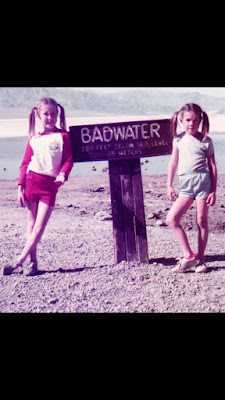 Recreating a 1984 family photo with my sister!
Monday, July 23rd, 11 pm: Badwater 135, Wave 3 begins. The sun has set and it is still 112 degrees. The pavement and the rock cliffs are still radiating heat. 30 runners set off running through this barren and desolate land partially illuminated by a nearly full moon. A light headwind increases the difficulty and desiccates the mouth and lips quickly. The other 69 runners in wave 1 (8pm) and wave 2 (9:30) are already on course several miles ahead. The race is unique in that your crew can meet you almost anywhere on course with a few exceptions due to parking availability/safety. We’ve barely gone a mile before we pass the first sidelined van with the hazard lights on. Soon the road resembles an airport landing strip with red lights blinking down the side as far as the eye can see. In fact, the best way to see where the course is headed is to follow the van lights while trying to find your own van every couple of miles for some brief aid before they leap-frog you and rejoin the line of vans someplace up ahead. Though a bit chaotic at times, I rather enjoyed the action and the energy of the whole scene.


Early on I tucked in behind eventual second place finisher Jared Fetterolf trying to keep my pace under control and to get a little protection from the wind. But I was especially glad to have company when a coyote was standing not more than three feet off the road. We both veered wide, but the coyote just stood there staring at us, probably thinking to himself “what a bunch of fucking idiots!” ;)
Despite what seemed like an easy pace, I wasn’t even at the marathon point in the race when I first started puking! That is quite disheartening! Miles 26-58 were a huge struggle for me. Even though it wasn’t even the hottest part of the day, I felt so drained from the temperatures, my stomach wouldn’t cooperate and the 5,000’ climb from mile 42-58 was mentally defeating. This section was a huge low for me and I fell way behind the leaders in the women’s field. And then at the top the incline shifted and so did my whole race. I took a few minutes with my crew in a chair to get a leg massage, chew a few Pringles and some “quinoa granola” (???) that my crew chief Jimmy forced on me. I washed it all down with a shot of anti-nausea liquid and it all stayed down! Running downhill was so much easier and I think the lower effort really helped me recover as well. By the time we were passing the dry lake into Panamint I was rolling, despite the mercury nearly busting out of the thermometers at that point. (The day had a record high of 127 degrees and ground temps of 158. Just for reference, the medium setting on my fruit dehydrator is 125, and you can *literally* cook an egg at 158.) However, I was in my cotton shirt with a lot of sun protection and ice, such that I felt like I was really managing the heat well.


Jimmy told me I’d need solid food at Panamint and I would’ve bet him money beforehand that there was no way that would happen, but then I got there and downed a piece of pizza and a full rootbeer. So that’s why they tell you to have someone with experience on your crew! I also got some attention to my feet. All in all we spent 24 minutes there - almost the exact amount of time I finished behind Brenda at the end - but I think that time was critical to regroup and replenish the early deficits. Leaving Panamint, I was in beastmode and moved up about 8 places in just as many miles. Near the top we started playing leap-frog with fellow Oregonian Yassine Diboun as well as then second place female Micah Morgan, both of whom were super friendly along with their crews and it made for some good natured and light-hearted competitiveness. I also crossed paths with good friend Bob Hearn at the Father Crowley parking lot where he was taking some extra crew time so we had lots of friendly company and my spirits were high. A few clouds rolled in and we were treated to several fighter jet flybys and their sonic booms. All in all, I was loving this section right up until I was hit with a massive calf cramp that stopped me in my tracks! We hid behind a rock to do a little massage and then I stopped to change my shoes, use the roller stick, get some arnica and Tylenol to try to the fix the problem. I was totally panicking, yet smiled and acted as casual as possible as Micah went cruising by. After a few minutes of stretching, I was back on the road able to run and passing Micah just before the mile 90 check point at Darwin where we heard I was in 12th with Brenda ahead by 67 minutes. I knew it was a huge lead, but there was only one possible option: fight like hell to the finish! Plus, I wasn’t giving second female back now!


Unfortunately, the deficit was just too big from my early low to catch her. But we did have two “carrots” on the climb that kept me motivated to keep the pedal to the metal, but more than anything I was just ready to be done. We passed the two guys early and there was little fanfare after that. We didn’t have enough real estate left to catch Brenda, there was no one else on the course near us and we were definitely going to break 29 hours. My entire crew joined me for the finish as we trotted across the line together: Official Badwater finisher, 6th place, 2nd female, 28:48, with lots of hugs all around. 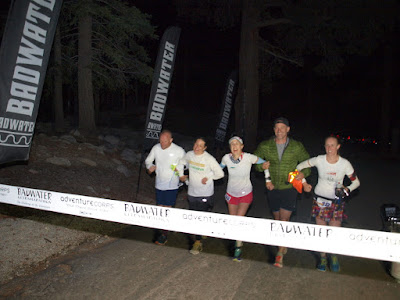 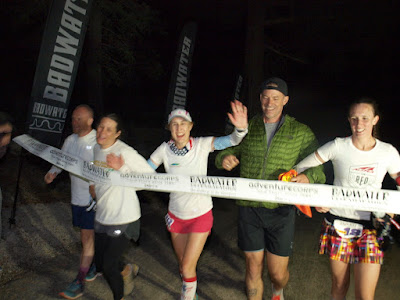 I owe a mountain of thanks to my crew, Megan Alvarado, my sister Sarah, Jimmy Dean Freeman, and Dennis Gamroth. These people were instrumental to my success in this race and they deserve every bit as much credit because this was a team effort! They basically had to participate in their own feat of endurance and put up with the same temps all while catering to my every need. Love and gratitude; I am forever in your debt!

My finish allowed us to hang out with RD Chris Kostman and his crew for a bit, drive down the mountain, shower and hit the hotel hot breakfast right as it opened at 5 am - how’s that for good timing! I was too wired to sleep, but the crew crashed for several hours for some well deserved rest. Later that afternoon we went back up to the finish to honk and cheer for those still climbing the hill (then 38-41 hours into the race depending start times). We passed more than 20 runners making the climb after two full nights on the course. We enjoyed lovely weather with ice cream and beers at the top watching people finish until it started to pour with HAIL. That’s right, the mid packers had two days of scorching temps and sleep deprivation, only to be pelted by ice and flash floods at the finish! These guys and gals are serious tough-as-nails rock stars!!

After doing this race, I understand why it is so special and why people want to put themselves through this challenge. It really was the most difficult race I have ever done, but the location and the people were amazing. In fact, I would go so far to say that anyone who has finished Badwater is a Badass in my book, and not, in fact, a fucking idiot. ;)

Great write up. You are amazing. Way to fight through the nausea. Been there done that. You know I must ask about the anti-nausea liquid.

Thank you for the race report! Congrats, you are amazing. I love how you described your competitive tactics, way to stay motivated.

What a fascinating write up. I love reading detailed descriptions of these races.